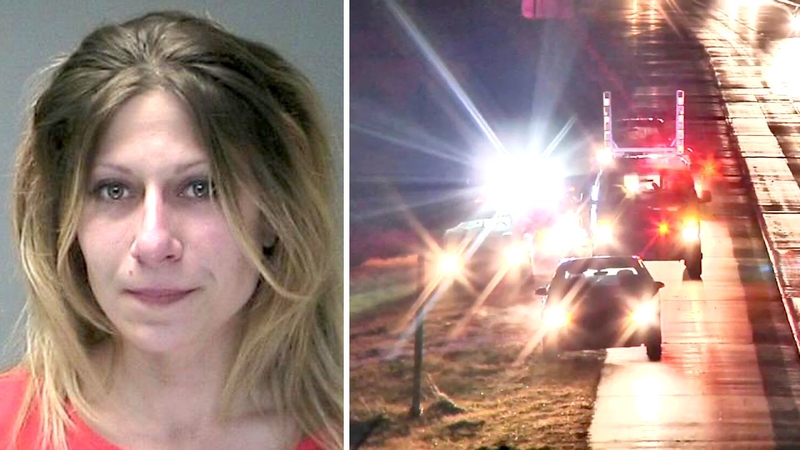 Suffolk County officer climbs into moving car to save baby

LONG ISLAND, NY -- A police officer on Long Island jumped into a woman's car Thursday after she failed to pull over for a traffic stop and he spotted a baby in the back of the vehicle.

Maria Lagatta, 37, of Farmingville, was charged with driving while ability impaired by drugs, aggravated driving while intoxicated with a child passenger (Leandra's Law), and endangering the welfare of a child.

Around 5:30 p.m. Thursday, police said Lagatta was driving slowly -- about 20 mph -- east on the Long Island Expressway in Manorville when a highway patrol officer attempted a traffic stop.

Lagatta -- a paralegal and mother of two -- refused to pull over, according to Suffolk County Police.

"When I pulled alongside the car, I rolled down my window, and the motorist rolled down their window as well," Officer Joseph Goss with Suffolk County police said. "I told them to pull over and with her window down on the passenger side she told me 'I can't.'"

That's when Goss noticed Lagatta's 22-month-old daughter in the backseat.

"She had slowed her vehicle down to 5 miles per hour. I was able to pass her on the right-hand shoulder," Goss said.

Goss pulled over ahead of her car and ran up to the moving vehicle.

"I leaned in forward through the window," Goss said. "I'm pretty tall, so I was able to reach the shifter and slam it into park.

Lagatta's attorney, Craig Fleischer, spoke exclusively with Eyewitness News on behalf of his client, saying she thanks the officer.

"We're extremely grateful that no one was injured and for the efforts of Police Officer Goss," Fleischer said.

Prosecutors said Lagatta told police, "This is my last hoorah with my ex. I took PCP."

Her husband was at the courthouse Friday, and said she is a good mother.