Married couple has dueling 'his and hers' presidential election yard signs 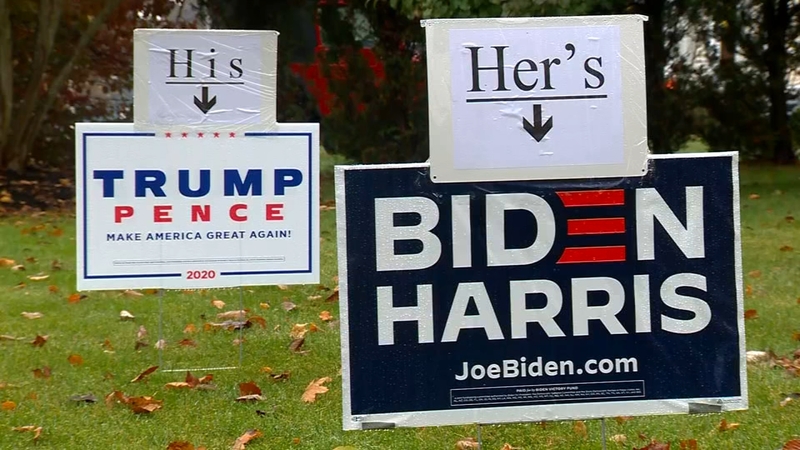 ABINGTON, Massachusetts -- A couple in Massachusetts says their marriage will survive the 2020 presidential election, despite their differences in opinion.

Rocky and Tilda DiRocco have been married for 34 years and have been together for nearly 40.

They both placed campaign signs in their yard showing their support.

The Biden sign says "hers" and the Trump sign says "his," just so their neighbors know where they stand.

The couple says their love for each other is more important than their politics.

RELATED: Texas neighbors with opposing political signs show how to have friendly relationship

WATCH: Meet Tasha and Marne, two Texas mothers who are setting an example for their kids and neighbors about love and respect despite differences in opinion.

Regardless of their party lines, there is one thing the couple agrees on when it comes to 2020 politics.

"I wish that they would take this message to Washington and realize there is something more important than winning for your party. Try winning for your people," Rocky told WCVB. "That's what's really important, and they've completely lost sight of that."

The DiRocco's have already voted and said they will accept the eventual winner.

"I just want to go back to normal, you know, where people aren't going nuts at each other," Tilda said.

The couple hopes their story can help families also dealing with political divisiveness.

So what happened when they got in a political scuffle during their interview? Rocky kissed Tilda and they moved on.

You can watch the sweet moment in the video above.

The lifelong Democrat recently turned Republican says his sign was stolen six times before he decided to take action.