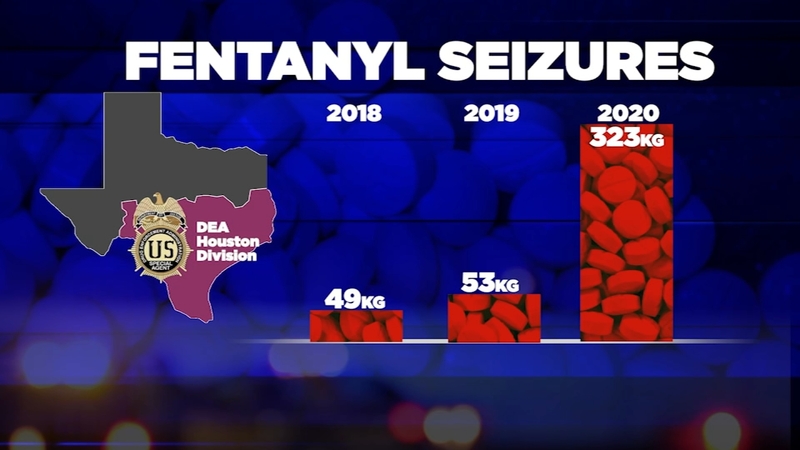 HOUSTON, Texas (KTRK) -- While public health has been consumed by the coronavirus pandemic, the feds are sounding the alarm about another health crisis: the high numbers of dangerous drugs they are finding on Houston streets.

Seizures of methamphetamine and fentanyl are up exponentially compared to previous years. The Drug Enforcement Administration (DEA) says it's proof that, despite COVID-19 restrictions, these dangerous drugs are still crossing the border and destroying lives.

"It continued. It did not slow down at all," said Steven Whipple, Special Agent-In-Charge for the DEA's Houston Field Division, which also includes a large portion of south Texas. "The only thing that changed is how they brought it in the country."

The drugs moved from passenger vehicles to bigger trucks, according to Whipple, hidden away in gas tanks or secret compartments on 18-wheelers.

The destination is Houston and beyond. The amount seized is alarming.

"Which is a 600 percent increase," explained Whipple. "That's enough fentanyl to kill half of the population in the United States. Two milligrams is enough to OD a person. It's just simple math."

In Houston alone, the Houston Forensic Science Center reports its fentanyl cases went up from 55 in 2019 to 95 in 2020, a 73% increase, and it's being found in other illicit drugs.

That's thousands of pounds of drugs seized along with cash and guns. The question is how much more is getting through?

"It's everywhere. It's not hard to find. It will find you," said Chandler Matte, a 28-year-old from Louisiana who is seeking treatment for a methamphetamine addiction at Cenikor, Inc., a long-term nonprofit treatment provider with a location in Deer Park. "Time flies by. You wake up one day and you're in jail."

"It's in everything," said David Gomez about fentanyl. Gomez is also in treatment at Cenikor for a fentanyl addiction, which started after he lost his wife and two children in a car crash. "I was going through a very heavy grieving process."

The two men are examples of the toll these dangerous drugs have taken on people and their families.

He and Gomez are working every day to get well. While both are on a path to eventually help others overcome their dependence on drugs, they fear what the increase in the drug supply is doing.

"I don't think the supply would be as high if the demand wasn't as strong," Gomez said.

"We just have to be smart and stay smart about [traffickers that] are doing it," said Whipple. "It's a battle that's not going to go away."