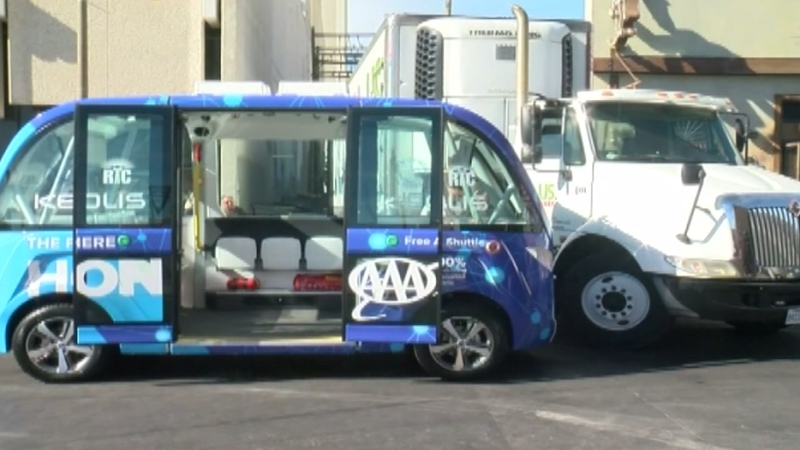 Self-driving shuttle involved in crash on first day in operation

LAS VEGAS, Nevada -- The robots won this one.

A driverless shuttle bus was involved in a minor crash with a semi-truck less than two hours after it made its debut on Las Vegas streets Wednesday in front of cameras and celebrities.

The human behind the wheel of the truck was at fault, police said.

"The shuttle did what it was supposed to do, in that it's (sic) sensors registered the truck and the shuttle stopped to avoid the accident," the city said in a statement. "Unfortunately the delivery truck did not stop and grazed the front fender of the shuttle. Had the truck had the same sensing equipment that the shuttle has the accident would have been avoided."

The oval-shaped shuttle that can transport up to 12 people has an attendant and computer monitor, but no steering wheel and no brake pedals. It uses GPS, electronic curb sensors and other technology to make its way. It was developed by the French company Navya and was tested in January in Las Vegas.

At the unveiling ceremony, officials promoted it as the nation's first self-driving shuttle pilot project geared toward the public.

Before it crashed, dozens of people had lined up to get a free trip on a 0.6-mile loop in downtown Las Vegas. City spokesman Jace Radke said the shuttle took two more loops after the crash.

NASCAR driver Danica Patrick and magic duo Penn and Teller were among the first passengers.

The transportation company Keolis is operating the shuttle. Its vice president of mobility solutions, Maurice Bell, said the bus will scoot through Las Vegas at no more than 15 mph. AAA Northern California, Nevada and Utah, which is sponsoring the one-year pilot project, expects that 250,000 people will use the shuttle.

Las Vegas resident Stacey Gray and her dog Socrates were among the first to board the bus Wednesday. She said the drive was so smooth that she couldn't even tell she was in a car, but approaching the intersection made her a little nervous.

"A little bit of that looking around and you know wondering if it was going to stop, and 'Oh my gosh, there's a car behind us, kind of little hesitation,'" she said. "But it stopped and it was fine."