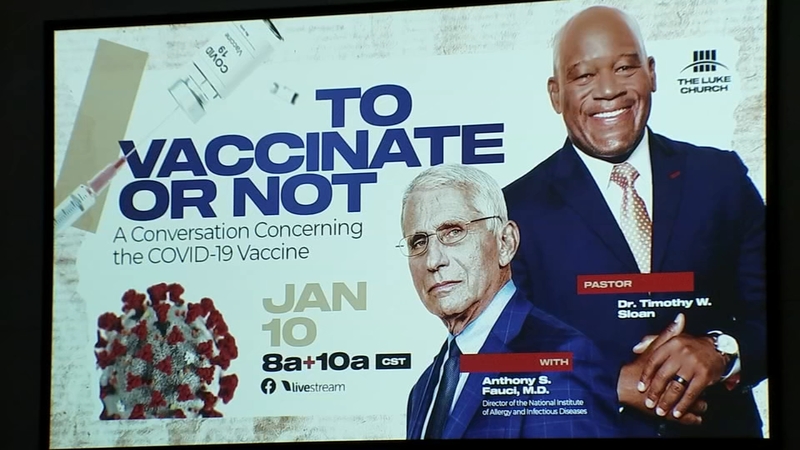 Why should the Black community trust the COVID-19 vaccine?

HOUSTON, Texas (KTRK) -- The mistrust surrounding vaccines in the Black community runs deep, but a Houston-area pastor is doing his best to change that.

Dr. Timothy Sloan of the Luke Church in Humble had a virtual sit-down with Dr. Anthony Fauci, who has been at the front and center of the U.S. response to COVID-19, to gather facts and, hopefully, build up confidence in the much needed vaccine.

In the video, watch our ABC13 team walk you through using the vaccine tracker within this page.

Sloan said it all started when he decided to reach out to Fauci and explain his concerns.

"I decided that I would write a letter to Dr. Fauci, and I would simply ask him would he sit down for a conversation? I sent him a letter, and email, and a hard copy, and surprisingly, he said yes. He would love to have the conversation," said Sloan.

That conversation, called 'To Vaccinate or Not' is important to Sloan for many reasons. His wife is a physician, so in addition to knowing the value of science, he knows the hesitancy Black people have about vaccines.

After the Tuskegee syphilis experiment, many African Americans say there's still a distrust with the medical community.

"For many of us, we're seeing it through the lens of Tuskegee, and so with that in mind, it has been challenging to have the level of confidence needed to have the vaccine," Sloan said.

The Tuskegee Experiment was meant to record the natural progression of syphilis infection in Black men, but the researchers didn't tell those who signed on.

The experiment lasted 40 years. During that time, the American government made efforts to ensure the participants in the study never knew the true intentions of the researchers. Even when they discovered penicillin was a reliable treatment for the infection, the participants were actively kept from receiving it.

It left many blind, maimed or even dead.

During the conversation with Sloan, Fauci didn't shy away from that atrocity and answered directly when asked: "Why should the Black community trust this vaccine?" The skepticism, Sloan said, is real, and for many Black Americans, the response to the vaccine question is the same.

"I feel like Black people don't feel like the government is for them ... [They're] out to get them in some type of way." said Channell Martelly. "I'm just going play it out and see how it goes for everybody else before I just take the first step. If it's good, and it works, and no bad, major side effects, then I'll be open to take it of course. I want to see how it plays out first."

With more than 350,000 Americans dead and the U.S. setting records almost every other day, it's clear something has to be done. Sloan prays his church gets something out of the discussion with Fauci, and ultimately, hopes more people get vaccinated.

"My hope is that hearing from Dr. Fauci and asking some of the questions that I think so many of our congregants are asking, that there will be a level of confidence raised following this," he said.

The Luke Church plans to air the interview with Fauci on Sunday, Jan. 10, during its 8 a.m. and 10 a.m. service streams.

Sloan hopes other Black pastors and churches will follow suit and have an honest conversation with their congregants.