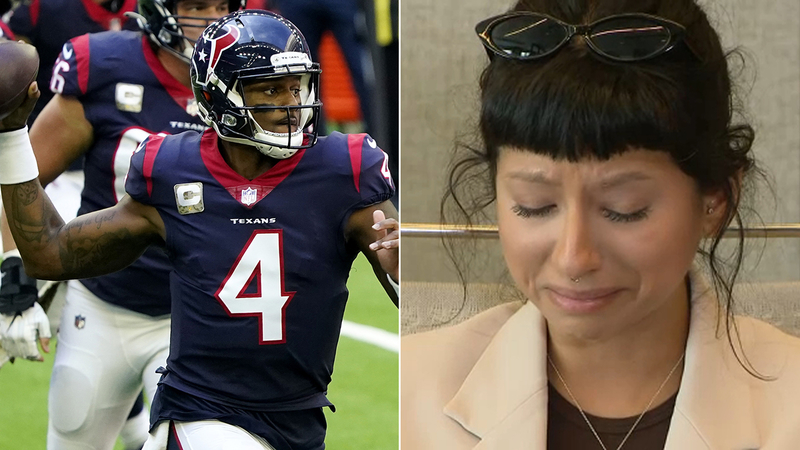 For the 1st time, 1 of Deshaun Watson's accusers speaks out

Ashley Solis identified herself as a victim of sexual assault by Watson. She spoke about her encounter with Watson on March 30, 2020 in her own home.

"I hope my story gives [other victims] the courage to speak out," Solis said. "I was afraid. I'm not afraid anymore. I do exist."

You can watch the victim's full statement in the video player above.

Solis is a licensed massage therapist and described the practice as what she loves to do most. She said massage therapy has been forever tainted to her because of her traumatic experience.

Through tears, Solis explained that, since her alleged assault, she has had to cut sessions with clients short due to the trauma.

She explained that she suffers from panic attacks, anxiety and depression after her alleged assault by Watson, and is in therapy.


According to Solis, her father, who was once a die-hard Texans fan, can no longer say Watson's name without turning red in the face.

"I will not let Deshaun win," she said. "He needs to be held accountable for his actions."

The following is a summary from the incident, as explained in the lawsuit:
March 30, 2020, at the plaintiff's home in Texas. The plaintiff has run a massage therapy business since 2018 and is a licensed therapist. He contacted her via direct message on Instagram and insisted no one else be present during his massage. The woman alleges that Watson exposed his penis and touched her hand with his penis. She says she ended the massage abruptly and Watson told her: "I know you have a career and a reputation, and I know you would hate for someone to mess with yours, just like I don't want anyone messing with mine." She says he texted later to apologize but she did not respond.

A second victim provided a statement for Buzbee's team to read aloud. The alleged victim, Lauren Baxley, said she was instructed by her trauma therapist to write a letter to Watson to help her heal.

The letter detailed her experience with Watson from June 2, 2020. Her story was like many of the others filed.

She described Watson being completely nude, despite requests to cover himself, and she described him touching her with his penis without her consent.

In her letter, Baxley went on to describe her fear of being attacked at work or in her own home after reading comments from Watson's supporters online.

The following is a summary from the incident, as explained in the lawsuit:
June 2, 2020 at a spa in Houston. The plaintiff has been in the massage business about 11 years and is a licensed therapist who routinely works with pro athletes. She says Watson contacted her via Instagram and later by phone, telling her he makes "a lot of massage therapists uncomfortable and it's really hard for me to find someone who will meet my needs." During the appointment, the woman says, Watson continually tried to remove towels and exposed his penis multiple times and moved "in such a way to make his penis touch Plaintiff." The lawsuit says Watson tried to schedule future appointments but was ignored or declined.

According to Buzbee, although 22 lawsuits are filed, five other women came to him with stories, but they were turned away because he did not believe he could provide a case.

Each case is very similar, according to Buzbee. Watson reached out to the women on social media, usually Instagram, and asked if they could provide a massage, even to some women who are not licensed therapists. He arranged the appointments on social media and would often insist the women be alone during the scheduled massage.

Buzbee said in many cases, Watson would dictate via direct message what type of massage he wanted and dictate women wear certain types of outfits. According to Buzbee, Watson would also often insist to use a towel to cover himself up and would bring his own towel, which was a small washcloth.

In many cases, Watson allegedly had the women sign a non-disclosure agreement before or after the session, Buzbee said.

In total, two of the alleged victims are located in Georgia, one in California, one in Arizona and the rest in Houston. Buzbee said 15 of the accusers are Black women, four are white and three are Hispanic.

Buzbee said, outside of his lawsuits, two to three of the women, including Solis, have made formal complaints to Houston police, and other women are still considering their options.

The attorney provided the press with five pieces of evidence and said he would later post them online. The "packets" included screen shots of direct messages between the alleged victims and Watson, an NDA Watson allegedly emailed to one of the accusers to fill out, screenshots of direct messages between one of the alleged victims and a coworker she reached out to directly after her incident detailing the experience, and screenshots of tweets from Watson's Twitter account where he talks about massages.

Buzbee said that some of the provided messages show Watson telling an alleged victim that he will borrow a massage table from the Houston Texans to use at the session. Buzbee said Watson borrowed equipment from the team multiple times.

Other screenshots show Watson arranging plane tickets and Uber rides for one of the victims from out of state, Buzbee said.

"The Houston Police Department was extremely cooperative, professional and compassionate, but, as you've heard here, it is a very intense process," Buzbee said of the official complaints filed.

When asked if he thinks more victims will come foreword, Buzbee said, "Once they hear from Ashley Solis, maybe they will."

In the hours following Buzbee's news conference, Watson's camp hit at claims by the outspoken attorney insisting the accusers aren't in it for the money.

According to Rusty Hardin, Watson's attorney, Buzbee had sought $100,000 on Solis' behalf to remain quiet. That demand, Hardin said, was made a month before her lawsuit was filed in mid-March.

Previously, 18 professional massage therapists have come out in support of the Texans quarterback, saying the allegations were not consistent with the experiences they've had with the star athlete.