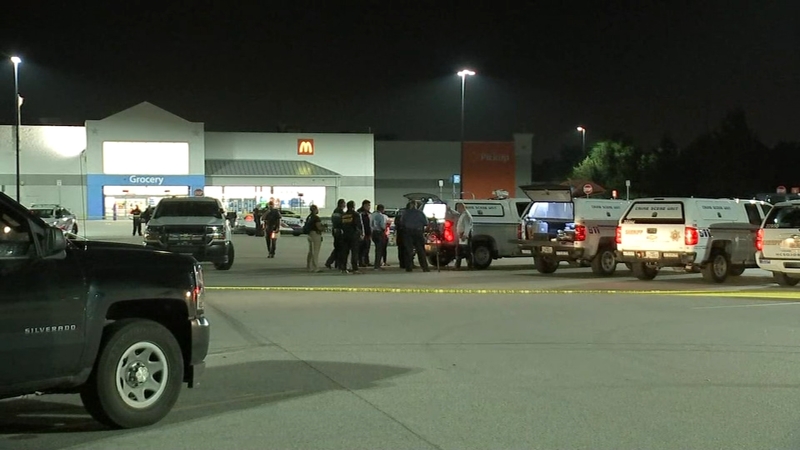 HARRIS COUNTY, Texas (KTRK) -- Multiple gunshots were fired in a deadly shootout between shoplifting suspects and deputies in a Walmart parking lot in the Spring area.

Deputies were reportedly called to the store in reference to a suspicious vehicle.

The Walmart employees reportedly recognized two shoplifting suspects, a man and a woman, from a flyer put out by Walmart security. The suspects had allegedly previously stolen from a Walmart location about four miles away on Louetta and I-45.

"I know it was enough time, either hours or days, for the Walmart on Louetta to draft up a flyer, take pictures from their cameras, and paste them on flyers to get them at all Walmarts," Pct. 4 Constable Mark Herman said.

How did the fatal shooting of an armed shoplifting suspect unfold outside of a Walmart? Harris Co. deputies give an explanation. Press play to watch.

Officials say their vehicle also matched the description of the vehicle involved in previous thefts from another Walmart.

The suspects went into the Walmart and stole items before returning to their car outside, employees claimed.

"That's what alerted them in the first place to these suspects... when they saw them fill their baskets up in the store. At some point last night, the manager approached the male and female and they just decided to leave the store," Herman said. "As they were leaving the store, our deputies were pulling up. The manager was able to say, 'That's them right there,' and that's when the altercation occurred."

Our Homicide and CSU investigators are responding to a retail store in the 21100 block of Kuykendahl Rd. in Spring in reference to a shooting involving @Pct4constable deputies.

A male was pronounced deceased on the scene. No constable deputies were injured. PIO is also en route pic.twitter.com/j6AilfY5dY

When two Precinct 4 constable deputies responded to the scene, they ordered the suspects to step out of the vehicle.

According to Herman, one of the suspects exited the vehicle and started walking away, all while engaging in a verbal interaction with deputies. At some point, the suspect reportedly raised his hands in the air with a handgun, but immediately lowered his hands and began shooting at the deputies.

Meanwhile, the female and male suspect still in the vehicle fled the scene. They were later arrested by Harris County sheriff's deputies in the area of Rankin Road and I-45, according to Herman.

They are reportedly cooperating with the investigation and provided statements about what happened. They were not injured in the shooting.

Herman said he believes the suspects arrested and the man killed at the scene may have been responsible for a series of Walmart thefts across the Houston area.

The two deputies involved in the shooting were not hurt.

The Harris County Sheriff's Office Homicide Unit and the District Attorney's Office are conducting investigations into the deadly shooting.

"Our deputies' training aided them in this gun fight and we are thankful to God for watching over them," Herman said. "Deputies will be placed on a mandatory three days off while conducting the investigation."