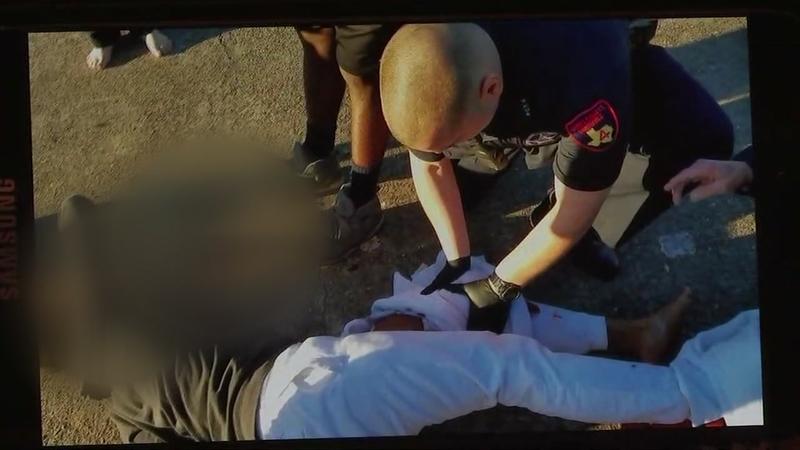 Teen shot trying to put AK-47 down her pants: Deputies

HUMBLE, Texas (KTRK) -- The AK-47 rifle involved in the accidental shooting of a 17-year-old girl Tuesday was linked to a burglary that occurred earlier in the day.

The girl accidentally shot herself when she tried putting the weapon in her pant leg.

The Harris County Constable Pct. 4 office says the gun had been stolen in a burglary at a home in the 3900 block of Atascocita Road.

Cell phone video from a neighbor shows the girl who had apparently just shot herself in the leg with an AK-47.

Another neighbor, Don Sievertson, a veteran who worked in medicine, ran out to help.

"I thought somebody had been hit by a car because I saw her laying in the street," he said.

He saw the teen screaming uncontrollably in pain. He said he heard three gunshots and saw two wounds on her leg.

"I put pressure and the towel around the right foot and the heel of the foot was missing from the gunshot wound," Sievertson said.

Heavy police presence in the 4000 block of Wintergreen Drive/Woodland Hills. A woman was shot in the leg.

Investigation is on going.

Please avoid the area if possible.

Follow us at https://t.co/E8STYI44gc to receive live feeds on crime. pic.twitter.com/NlkxOd1f9c

According to Harris County Pct. 4 Constable Mark Hermann, there were two 17-year-old girls and a 16-year-old boy who were simply hanging out after school, but it was the teen boy that had an AK-47.

The teen girl then tried putting the weapon in her pant leg and apparently struck herself, deputy constables said.

"She remained conscious the entire time, she kept thrashing back and forth, we assured her help was on the way, she was screaming in pain," said the neighbor.

Sievertson said a neighbor initially heard the teen boy say it was a drive-by shooting, but that neighbor reassured police he saw the teen slide the AK-47 into a sewer.

Authorities were able to recover the weapon and took the 16-year-old boy into custody. He's been charged with tampering with evidence and burglary.

The constable's office is seeking charges for unlawful carrying of a weapon and burglary on the girl.

She is in critical condition and underwent surgery.

"She's lucky, she's very lucky with that type of weapon, it would have been massive," said the neighbor.