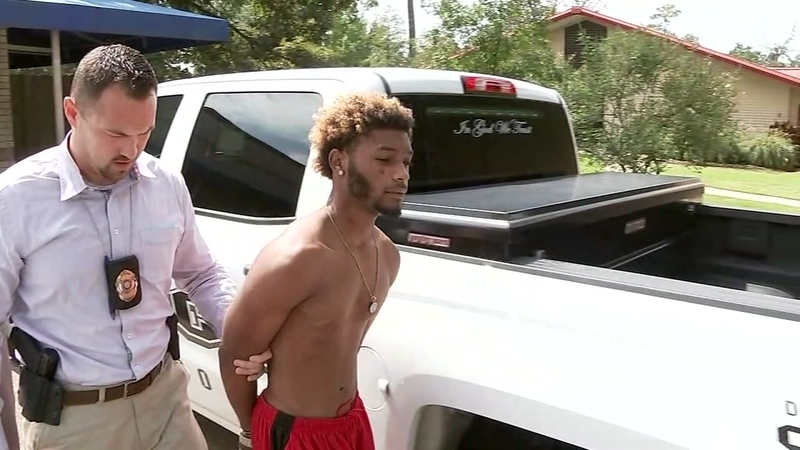 HOUSTON, Texas (KTRK) -- At least one person has been arrested and tied to the robbery at the Denny's in Shenandoah early Thursday morning, officials say.

Tomell Thomas, 17, was detained as he walked towards an Exxon gas station at the corner of Greens Road and John F. Kennedy Boulevard around 8:20 a.m.

Tomell's arrest came hours after a chase and manhunt that began at Denny's.

Police say two men went in with guns drawn, while a third stayed outside in a getaway car.

One of the suspects pointed a gun at a customer and took her phone.

While that was going on, the first suspect turned his attention to an elderly couple in the restaurant and tried to rob them.

As the men drove away from Denny's, an officer spotted the suspect vehicle and the chase was on, heading south toward Houston.

The pursuit ended when the suspects crashed at JFK and Rankin, then bailed out of their SUV.

The men ran into the woods near Bush Intercontinental Airport, which led to a search of the area that was eventually called off.

"It is my understanding they had weapons when they robbed the Denny's. We don't know if they had shots fired or anything like that. We are trying to figure that out," said HPD Lt. Larry Crowson.

A carjacking also occurred at a Valero gas station on Greens Road.

Around 7:20 a.m., HPD says a family pulled up in a white SUV. Two people got out and walked into the store.

Seconds later, surveillance video shows a man wearing all black walking up to the SUV. He then gets in the driver's side and starts to back out.

As that is happening, a 13-year-old girl in the back seat of the SUV opens the door and jumps out.

She runs to the store as the suspect drives away.

HPD believes the man who stole the car was picked up later at a nearby bus stop. He could be the second person under arrest.