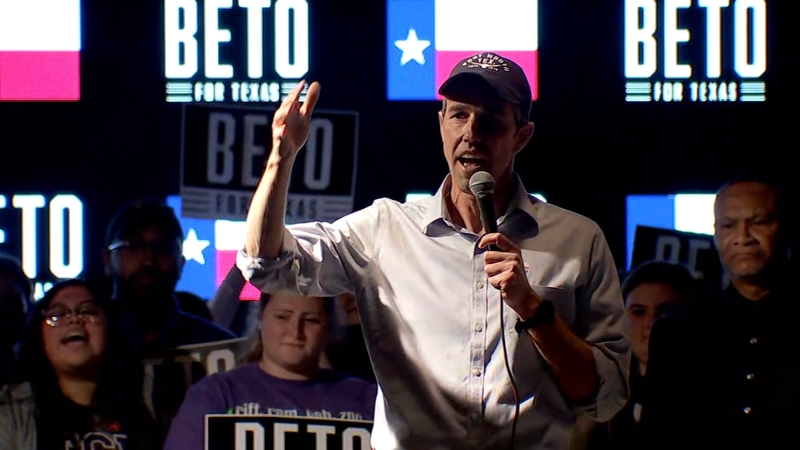 HOUSTON, Texas -- Beto O'Rourke won the Democratic nomination for Texas governor on Tuesday in a win that kicked off what could be a long, bruising midterm season that is poised to reshape power in state capitals and Washington.

The former congressman and short-lived presidential candidate who nearly ousted Texas Sen. Ted Cruz in 2018 will get the chance to try for an even bigger upset in November. He'll be an underdog against incumbent Republican Gov. Greg Abbott, who looked poised to lock up his party's nomination after beginning the campaign with more than $50 million and staking out hard-line positions on abortion, guns and immigration.

Some of those casting ballots, however, said they were worried about new restrictions on abortion that are the toughest in America going too far.

"That's where I think Greg Abbott and the current Republicans kind of crossed the line," said Eric Medrano, 25, a longshoreman in Houston who voted for one of Abbott's far-right challengers, Don Huffines. He added, "I don't believe (abortion) should be banned at such an early, early stage."

In the GOP attorney general primary, incumbent Ken Paxton is facing several challengers, including Texas Land Commissioner George P. Bush, the nephew of one president and grandson of another, and U.S. Rep. Louie Gohmert. Paxton led a failed lawsuit to overturn the 2020 election and has for years faced securities fraud charges and an FBI investigation into corruption allegations. He has broadly denied wrongdoing.

Democrats face challenges of their own. Nine-term U.S. Rep. Henry Cuellar is hoping to avoid becoming the first Democratic member of Congress to lose a primary this year. He's facing progressive Jessica Cisneros and is contending with the fallout of a recent FBI raid on his home, though he's denied wrongdoing.

Still, in America's largest Republican state, much of the focus is on the GOP's rightward lurch.

Texas' rapid growth - driven by more than 4 million new residents - has shifted once solidly red suburbs away from Republicans. But the GOP has countered that with redrawn maps that left fewer competitive congressional districts along with dramatic new voting restrictions.

Thousands of mail-in ballot applications - and actual ballots - were rejected under the new requirements. Most of those were due to voters not including newly mandated identification, worrying local elections officials that many won't correct problems to have their vote count.

"Just common sense will tell you there is going to be a number of people who don't cure that ballot," said Bruce Sherbert, the nonpartisan election administrator in Collin County, in Dallas' northern suburbs.

In Houston, morning voters were left standing in line or looking for polling places after a Harris County website that directs people to nearby voting sites went down temporarily.

Also, a handful of Democratic poll workers in Fort Worth did not show up as scheduled, delaying the opening of some party polling places in Tarrant County. New state law requires each party to have a separate setup at voting sites.

The primary is also a first test of Republicans more aggressively courting Hispanic voters - and even before polls closed, they were celebrating.

Counties along the state's border with Mexico, long a stronghold for Democrats, were on track to smash Republican turnout levels compared with recent elections. It is the latest warning sign for Democrats who are trying to hold the line with Hispanic voters who swung toward former President Donald Trump in 2020.

Texas votes as the nation slowly moves out of the deepest lows of a pandemic that has raged for nearly two years. But that's tempered by inflation reaching a decades-high level and a burgeoning war in Europe. There are also persistent questions about the country's commitment to basic democratic principles after many GOP leaders have tied themselves to Trump's lie that the 2020 election was stolen.

After Texas, primaries in other states won't resume until May. That means results here could be viewed for months as a measure of the nation's political mood.

Republicans are betting that Texas' primaries will be the first step toward them retaking Congress in November, pointing to President Joe Biden's low approval ratings, spiking inflation and anger about the chaotic withdrawal of U.S. forces from Afghanistan.

History is also on the GOP's side. The party controlling the White House has lost congressional seats in the first midterm race every election cycle this century except in 2002, after the Sept. 11 terrorist attacks.

But the fight over the party's future is much fiercer than it was 20 years ago.

U.S. Rep. Van Taylor of North Texas, for instance, has become a target for some on the right after he voted to certify Biden's electoral victory and to create an independent commission to investigate the Capitol insurrection. The Republican now faces four primary challengers who have largely refused to accept Biden's victory and have tried to minimize the insurrection.

Cisneros is one of three Texas progressives who could secure Democratic nominations in House districts blue enough to all but guarantee they'll be headed to Congress. A 28-year-old immigration attorney who supports Medicare for All, Cisneros nearly toppled Cuellar during Texas' 2020 primary. She still has to overcome Cuellar's strong name recognition, though.

Cisneros has been endorsed by progressive stalwarts Vermont Sen. Bernie Sanders and New York Rep. Alexandria Ocasio-Cortez, who campaigned with her and with Greg Casar, an Austin City Councilmember who championed a $15 citywide minimum wage and is favored to win the Democratic nomination for an open House seat representing Texas' capital.

In Dallas, civil rights attorney and state lawmaker Jasmine Crockett has denounced "puppets" of the Democratic establishment and is running for a seat being vacated by longtime congresswoman Eddie Bernice Johnson, who has endorsed her.

Emily Winnenberg, 29, who owns a small business in Dallas, voted in the Democratic primary and said abortion and voting rights were top of mind.

"I'm first and foremost extremely concerned with women's reproductive rights being all but being taken away," Winnenberg said, adding that Biden's unpopularity means he "has a PR problem, not a logistical problem."