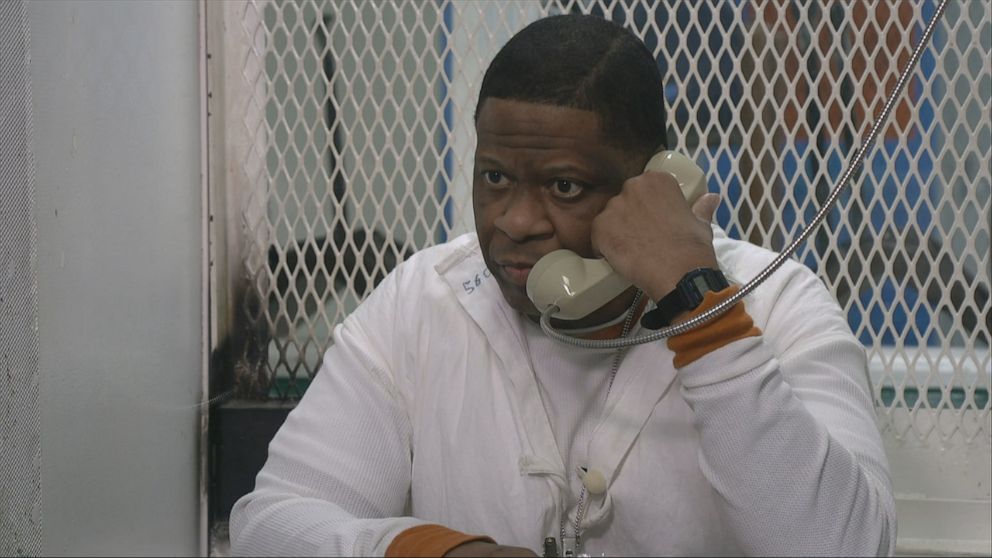 Rodney Reed has spent the last 21 years on death row for the 1996 murder of Stacey Stites, and he is scheduled to be executed in Texas in less than a month.

Reed's family and legal team say new developments in the case exonerate him and they claim Stites' then-fiancé, a former police officer named Jimmy Fennell, may have been involved.

Reed, 51, maintains his innocence. Fennell has long denied any wrongdoing in Stites' murder.

"Early on I was somewhat upset, just for knowing her. If I wouldn't have known her, I wouldn't have been associated with her [and] I wouldn't be in this situation," Reed told ABC News' Deborah Roberts in a jailhouse interview on Wednesday. "But, this is the situation that was handed to me so I have [to] accept ... that I did know her. I have to accept that there was a relationship. I have to accept that I'm here now for something that I didn't do."

Reed, who is black, was convicted of Stites' murder in 1998 and sentenced to death by an all-white jury. Bastrop County District Attorney Bryan Goertz said Reed has exhausted his option to appeal the case after appealing repeatedly from 2001 through 2015.

"None of them look like me but I ... grew up in the military. I was a military brat. ... I figured that they would hear the evidence and know that I'm innocent," Reed told ABC News. "Race played a big part. I didn't see it at first. ... I wasn't seeing racism like that."

Reed has found support with local politicians and activists around the country, most famously including Kim Kardashian West. His supporters have called on Texas Governor Greg Abbott to stay his execution on Nov. 20.

"I hope that the right people look at this case in the right way," Reed said. "The evidence will speak for itself."

Benjet's team maintains that Reed and Stites were having a consensual sexual relationship while she was engaged to her fiancé. They argue that this explains why Reed's DNA matched the semen found in Stites' body.

"We had a relationship," Reed said. "She wasn't going to marry Jimmy ... I don't think she loved him."

During the 1997 trial, the prosecution argued that this evidence showed that Reed raped Stites, and it ultimately led to his conviction.

The Innocence Project has filed a number of motions to test DNA evidence collected at the crime scene.

"So we're asking for DNA testing because it is a clear path where you can find additional evidence in this case. And the obvious thing that you would want to test is the belt, because that was the item used to strangle the victim. [It] was held in the hands of the murderer and that's very likely to have the DNA from the murderer," Benjet explained.

"We certainly think that somebody should stay this execution, and give us an opportunity to present this evidence in an orderly way," he added. "At the end of the day, if you look at all of the evidence, it shows that Rodney didn't commit this crime, and it paints a clear picture of who did."

Reed's defense team filed a federal lawsuit in August arguing that Reed's civil rights have been violated because prosecutors and the state courts have repeatedly denied his DNA testing requests.

"The battle has been a long 23-year nightmare for us," Sandra Reed, Rodney Reed's mother, told ABC News. "But through it all, just knowing the truth has kept us strong -- has kept us in this fight for him. Just knowing he's innocent."

The Innocence Project alleges that Fennell told another police officer that he would kill Stites if he ever caught her cheating.

Sergeant Mary Blackwell testified that Fennell made the comment while they were in police training together.

"Jimmy Fennell was having a conversation with another classmate that sat near him," Blackwell said. "He made a comment that if he ever found that his girlfriend was cheating on him that he would strangle her. And I looked over my shoulder at him and said, 'Well, if you do that they'll find four fingerprints all over her throat.' And he said, 'That's where you don't know...I'll strangle her with a belt.'"

Fennell's attorney Bob Phillips told ABC News that Fennell was not in any way involved or connected to Stites' murder.

"Not based on any of the credible evidence or physical evidence or forensic evidence," Phillips said. "It's a concoction of creative, brilliant lawyers trying to save a condemned man -- who is worthily condemned, I might add."

"If I for a moment thought Jimmy Fennell, or anyone else, was guilty of that offense, I'd be joining all these press conferences, standing up at the Capitol, begging for mercy, picketing," he added. "I never want it on my record that I facilitated, either passively or actively, in the wrongful conviction and execution of an innocent man. But there's never been a guiltier man in the history of Texas than Rodney Reed."

Prosecutor Lisa Tanner agreed, telling ABC News on Tuesday that she is still sure "the right man has been convicted beyond a reasonable doubt of Stacey Stites' murder."

"I have spent more hours in my life in the last 22 years trying to figure out how Rodney Reed could've not killed Stacey Stites," Tanner said. "Rodney Reed was a serial rapist."

While there have been several allegations of sexual assault against Reed, he was formally charged only once - and acquitted in that case.

Today, Reed says he tries "not to even entertain" the idea that he will die in three weeks.

"I feel that the truth is out there," he said. "They're going to be executing an innocent man."
Report a correction or typo
Related topics:
abc newsnational
Copyright © 2021 ABC News Internet Ventures.
More Videos
From CNN Newsource affiliates
TOP STORIES