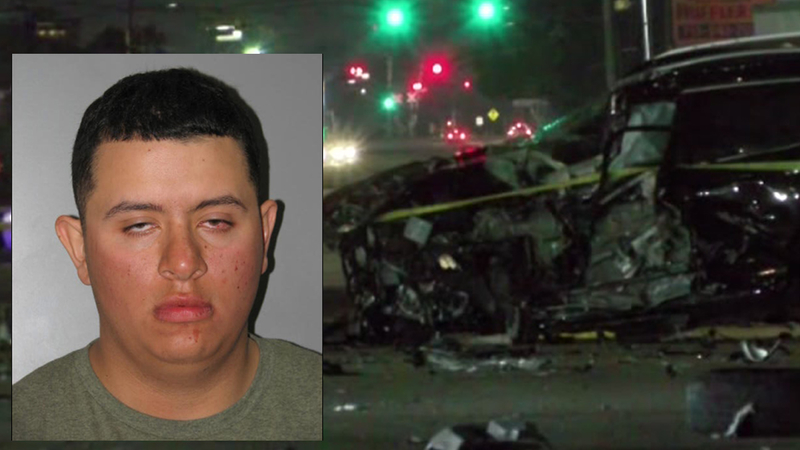 SOUTH HOUSTON, Texas (KTRK) -- A young mother was killed after a 19-year-old who authorities said was drunk crashed into her vehicle off the Gulf Freeway in South Houston.

It happened in the 1500 block of College Avenue, east of the Gulf Freeway.

MUGSHOT: This is Erick Hernandez. He is charged with intoxication manslaughter for the crash that killed a young mother on College Avenue in the City of South Houston Sunday night. https://t.co/BKaNwTIsK1 pic.twitter.com/qTCr7oYlVN

Surveillance video from an auto repair shop shows the wreck.

The young woman died at the scene. Her 48-year-old mother and her baby were taken to the hospital in serious condition, but with non-life-threatening injuries.

The victim's family tells us both are now at home recovering.

Officials say Hernandez will be charged with intoxication manslaughter.

"We believe that he spent well over $100 at the bar drinking alcohol that day," said Sean Teare, with the Harris Co. District Attorney's Vehicular Crimes Unit.

A fake Texas identification card, along with a bar receipt, were discovered in Hernandez's car after the crash, documents say.

Court records also show that Hernandez admitted to officers that he drank four or five beers and that he had been drinking since 6 p.m. Sunday.

He couldn't recall when he had his last drink.

Documents say that Hernandez had slurred speech, bloodshot eyes and poor balance immediately after the crash.

The Harris County District Attorney's Office is investigating whether the bar overserved him.

"I just know that a 19-year-old individual came out of that establishment highly intoxicated and moments later took a 23-year-old's life. That shouldn't happen," said Teare. "Someone in addition to that 19-year-old is going to have to answer for that."

The district attorney's office says the suspect is believed to have been drinking at Frontera Events Venue in the 1200 block of Houston Boulevard.

The employees and owner could face a charge for serving to a minor and serving someone while they're intoxicated.

More charges will be filed if prosecutors can determine who was serving him.