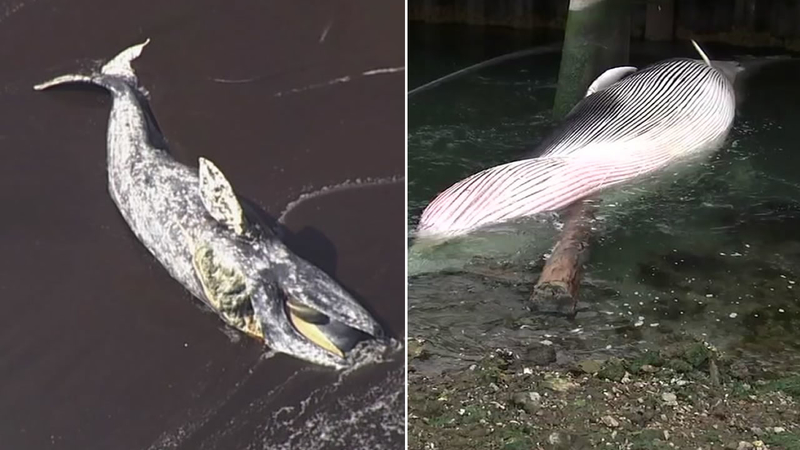 OAKLAND, California -- There are new details on the deaths of two whales in the San Francisco Bay. Officials say both whales died from injuries caused by humans.

One was reportedly hit by a ship and the other died due to severe entanglement.

A dead whale found beneath a bridge in the Oakland estuary was towed by wildlife officials to Angel Island, where scientists will perform a necropsy.

The Marine Mammal Center says both whales were discovered on Friday, May 18. First, a fin whale surfaced near Jack London Square and was later towed to Angel Island State Park.

All this talk about a whale in the bay can't help but conjure up memories of what may be the Bay Area's most famous marine visitor -- Humphrey the whale.

Scientists discovered fractures and dislocated vertebrae surrounded by massive hemorrhaging on both sides of the 45-foot juvenile female whale. The cause of death was determined to be vessel collision.

VIDEO: A look back at the exploding whale of Florence, Oregon
EMBED More News Videos

You may have heard about the exploding dead whale of Florence, Oregon. You might even have seen some pictures, but not these.

On Friday afternoon, the Center received reports of a second whale carcass that washed ashore on Tennessee Valley Beach in Marin County. Scientists from the Center and California Academy of Sciences performed a full necropsy on the 36-foot adult female gray whale on Saturday morning, May 19.

They found linear lesions that looped around the back of the neck and along both front flippers, which are injuries consistent with an entanglement, said officials.

The team also found two lacerations on the animal's right side with multiple fractures to the skull, consistent with a ship propeller. The necropsy team concluded that these ship-related injuries were likely sustained after the animal's death.

"The deaths of these two whales highlights the direct negative impact humans can have on marine wildlife," says Dr. Shawn Johnson, Director of Veterinary Science at the Marine Mammal Center.