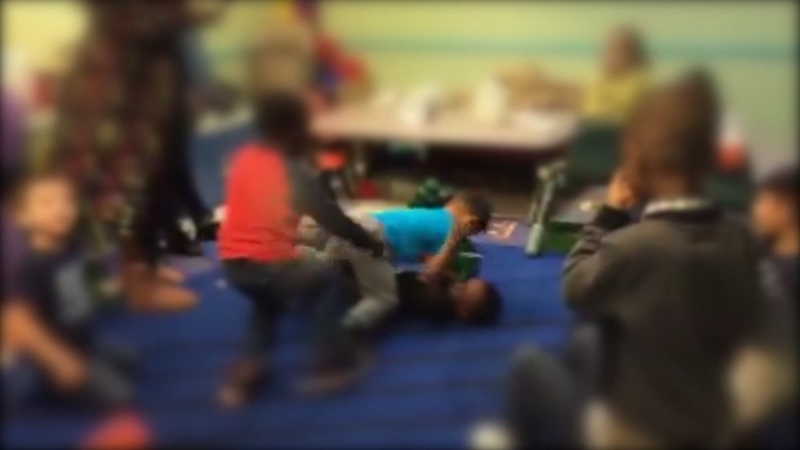 ST. LOUIS, Missouri -- A mother, frustrated by what she deems as inaction by authorities, is suing a day care center in St. Louis, Missouri, after surveillance and iPad footage captured teachers encouraging preschool-age children to fight each other.

Nicole Merseal's then-4-year-old son was encouraged to fight another child by teachers Mickala Guliford and Tena Dailey at the Adventure Learning Center in St. Louis, Missouri, according to a lawsuit filed in December 2016.

Merseal accused the day care center of directing a "fight club" in court documents, and permitting another child "to intimidate and harm" her son.

Merseal of St. Charles, Missouri, said two older sons were also at the center after they'd been dismissed from school and witnessed the incident.

"(They) were watching their little brother get beat up," she said. "They knew it was wrong."

When the teachers did not stop the fighting in December 2016, one of her older sons took a video of the incident on his iPad and sent it to his mother, Merseal's attorney, Jennifer Hansen, told ABC News.

"When I got the video, I was just in complete shock. I immediately left work," she said. "I also called the day care immediately and told them to go stop the fighting."

Merseal said she called the police and had them come and interview the director and staff. Her children were also brought back to the site so that they could be interviewed.

In documents released by the Missouri Department of Health and Senior Services, Jennifer Scott, the director of the center, said that Guliford had told her that the children "were bored" and that "we ran out of things to do," according to the state's documents.

Scott said she then sent Guliford and Dailey home and called the Child Abuse and Neglect Hotline and completed an incident report, according to the state's documents. The two women were then fired.

Documents stated that two unidentified children were interviewed and they said the teachers had allowed them to play with "Hulk Hands," large, green gloves, and fight each other.

"It happened a lot of times," one unidentified child said, according to the report.

Guliford also admitted to having the kids fight, according to state documents, saying, "I meant for the fighting with the Hulk Hands to be a stress release exercise."

"It did not last more than three or four minutes. ... No children got hurt but it was still a bad judgment call on my part," Guliford said, adding she had taken the children to the lower floor of the building because of a broken heating system on the other floors.

The city's Department of Health and Senior Services conducted an investigation upon learning of the incident, according to a statement released to ABC News.

"Upon learning of the incident, the facility director fired the two staff, reported the incident to the proper authorities, and wrote an incident report to document the information," the statement reads. "The facility also informed parents about the incident and the actions taken.

"The Section for Child Care Regulation's report concluded that licensing rules were violated and requested that the facility take additional steps to ensure staff were trained and knowledgeable about age-appropriate activities for children. The facility completed the corrective measures in April 2017."

Hansen and Merseal both told ABC News those actions were not enough.

"The day care should be held accountable," Merseal said. "They gave them a slap on the wrist."

Merseal is also seeking $25,000 in damages in her civil suit against the facility.

"It's really hard to explain to a 4-year-old what is and isn't normal, especially when they have their teacher telling them that, you know, they have to do this," Merseal said. "It took a long time for him to be comfortable in his new day care and to understand that they won't make him fight. ... It's really sad that he had to go through this."
Report a correction or typo
Related topics:
missouriday carefightu.s. & worldcaught on camera
Copyright © 2022 ABC News Internet Ventures.
TOP STORIES
Is Texas missing out? Oklahoma cashes in on booming marijuana market
Teen shot in gunbattle between 2 groups in west Harris County
Constellation Field has more than Cracker Jacks for fans to enjoy
Line for sold-out concert stretched across Houston's north side
Elections Administrator GOP on upcoming election result delays
Harris County DA demands Hidalgo stop 'daily public misstatements'
Woman claimed self-defense in deadly Clear Lake marina shooting
Show More
Houston shelters feeling impact of baby formula shortage
Here's how many inches of rain you could get over the next 7 days
Galveston woman Turns to Ted after flood insurance issues
Oklahoma legislature passes abortion ban, heads to governor
Prairie View's 'Freedom Park' will send anti-racist message
More TOP STORIES News