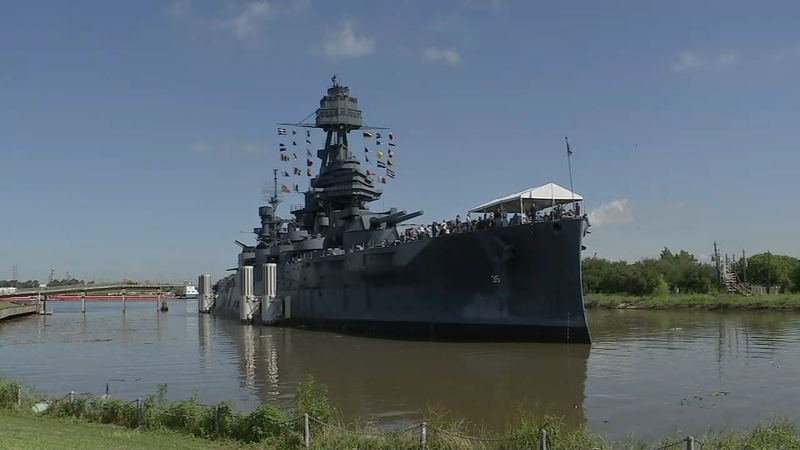 LA PORTE, Texas (KTRK) -- As the world stops to remember the sacrifices made by Allied forces on D-Day, a special honor was given to local World War II veterans on board the Battleship Texas.

On this day 75 years ago, the ship was off the coast of France supporting the D-Day invasion and helping turn the tide in the war.

Happening now: 10 World War II veterans been given the French Legion of Honor aboard the Battleship Texas. pic.twitter.com/8PbaSm8NjM

The Consul General of France, Alexis Andres, gave the highest and most prestigious decoration in France to the men who helped liberate France and save the world from Nazi Germany.

"For most of them, for the vast majority, they had never set foot in Europe, but they fought for Europe because they knew they fought for freedom, for democracy, to free our nations from tyranny. And their legacy today is the fact that Europe is at peace," Andres said.

"It was devastating. The war was devastating. I don't care how you say it, war is hell. And I'm so glad that I made it back. Somebody had a hand out there for me," WWII paratrooper James Earnst said.

The Battleship Texas is the last remaining battleship to have served during D-Day.

Also to commemorate the day, the Battleship Texas Foundation gave hour-by-hour updates on its Facebook page on what the ship was doing on D-Day.

The Battleship Texas is going to be moved to dry dock soon so repairs can be made to keep her afloat.

A decline in visits to the San Jacinto Battleground leaves keepers of the aging ship no choice but to seek a new home.

75 years ago the Battleship Texas was off the coast of France participating in the D-Day invasion. Today she will host a special ceremony honoring World War II veterans who will be given the French Legion of Honor. pic.twitter.com/dc3GEn1qTT

One of the men recognized with the French Legion of Honor has since passed. His family received the decoration on his behalf.

This is what the Battleship Texas looked like in the 1960s