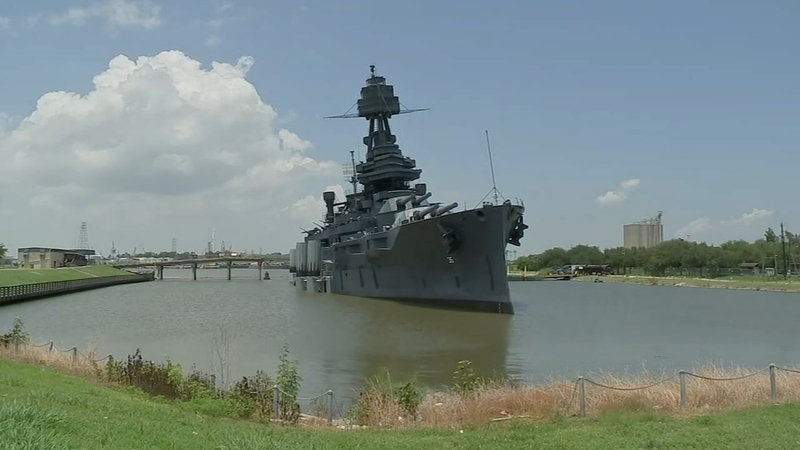 What's next for Battleship Texas?

LA PORTE, Texas (KTRK) -- There appeared to be an uptick in visitors to the Battleship Texas Wednesday, likely because of plans announced to repair the last surviving ship that served in two World Wars, with the intention of relocating it elsewhere along the Texas coast.

The Texas Legislature unanimously approved a $35 million infusion into the battleship that has been anchored near the San Jacinto Monument since 1946.

Those decades spent in the water have taken a toll.

"Sometimes, we tell maintenance crews not to take a wrench into the hull, because if it fell, it could hit the metal and keep on going," said Bruce Bramlett with the Battleship Texas Foundation.

The state has poured millions of dollars into Battleship Texas over the years, but the deterioration continued.

"We faced an impossible situation, of $100 million to place the ship in a permanent berth, or the unthinkable option of $30 million to scrap it," Bramlett said.

The Battleship Texas is a national historic landmark, and the last surviving Dreadnought.

WELCOME ABOARD! Enjoy the ride as SkyDrone13 video takes you over the historic Battleship Texas in La Porte, Texas.

It was involved in D-Day at Omaha Beach, and at Iwo Jima. A storied history, but each day, half a million gallons of water is pumped from its leaking hull.

Over the last year, the foundation investigated a new way of getting the Texas to dry-dock for repairs.

It funded a half million dollar phase one engineering study that would tow the battleship to a shipyard, likely in Mobile, Alabama, where it would be dry-docked and repaired.

The state legislation requires that it be returned to a site 'somewhere on the upper Texas coast.'

"But it won't be coming back here," said Bramlett, of the spot where the Texas has been for more than 70 years.

"The financials of the Battleship Texas means she's got to have more visitors," Bramlett said.

Its current location is off Highway 225, next to refineries and industry.

"That's not an attraction for tourists," Bramlett explained.

About 80,000 people pay admission to tour the battleship each year.

"That's not sustainable," Bramlett continued. "As part of the legislative deal, the state funding would end, and operation of the Texas will be turned over to the foundation, which means it will have to provide maintenance."

Though no negotiation on possible relocation sites has begun, Bramlett said Galveston may be a possibility.

"Their tourist industry is growing there," he said. "They're projecting 7.2 million visitors there this year, and it would attract a lot of those in Galveston for cruises."

Some longtime tour guides for the battleship question whether she could survive the trip to a boat yard.

"The ribs in the hull might not be able to withstand dry-dock," one said.

Bramlett said a second engineering study has been approved, and it will be reviewed by an independent firm.

"We have to have insurance as well," he said. "If she can't make the trip, she won't be moved."

Assuming she does, the trip for repairs is expected to be near the end of the year, after hurricane season.

It's expected the Texas will have a public bon voyage event, and a big celebration when she drops anchor in a new location.