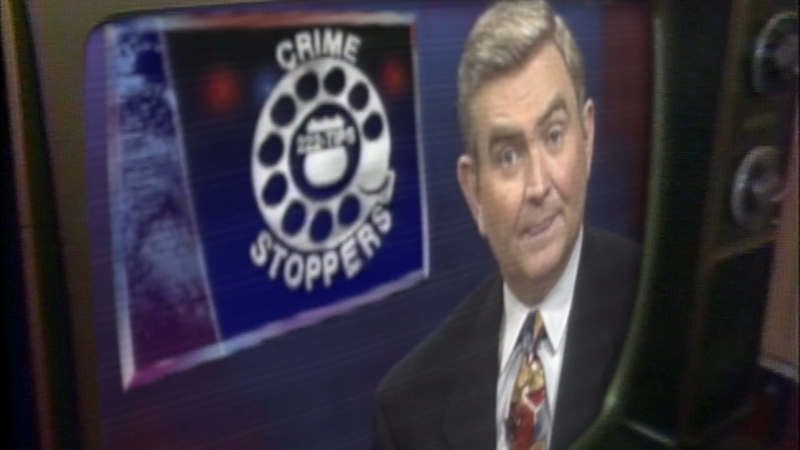 HOUSTON, Texas (KTRK) -- As the dean of Houston news, ABC13's Dave Ward has been at the forefront of Crime Stoppers of Houston since its inception 40 years ago.

Ann Carrizales, a Houston police officer, said, "I feel like people trusted Dave Ward before they trusted Crime Stoppers as an organization."

"We were meeting at a hotel, a directors meeting, and when I came back, all my hubcaps were gone from my car, so that just made me more dedicated," said Loftis in 2011.

So, what was the premise? Offer reward money to citizens for any anonymous tip that leads to the filing of felony charges or arrest of any suspect.

The group asked Dave and ABC13 to create and air reenactments of one crime each week.

The reenactments worked, sometimes too well, such as one that involved an armed robbery at a convenience store.

"Our actor, while they were filming inside, he's aiming a shotgun or something at the clerk with the clerk [raising his hands]," explained Dave. "Somebody drove by and saw that and called the police. When it came time for them to shoot the actor with the shotgun running out the front door, we ran out the front door and there were like six police cars out there with cops pointing their guns. He just melted right down into the sidewalk."

During its 40-year history, Crime Stoppers of Houston has solved more than 35,000 felony crimes and paid out more than $12 million in reward money.

With its unmatched success, the organization sets the standard for cities all over the world wishing to create their own versions of the successful crime-fighting program.

While those reenactments have been replaced by surveillance video or videos and photos captured by people with cell phones, Crime Stoppers continues to work as anonymously and efficiently as it has for 40 years.

Smart phones have eliminated the need for memorizing important phone numbers, but one almost everyone knows by heart is the Crime Stoppers tip line: 713-222-TIPS.

Carrizales remembers the first time she wanted to call Crime Stoppers as a little girl in a grocery store parking lot.

"I remember seeing a man sitting in a car and he was getting out of the car and looking around and then he'd get back in the car," she recalled. "I remember it being super suspicious to me, so I looked down at his license plate and memorized it. I could not wait to tell my mother that I needed to call the Crime Stoppers tip line. My mom said, 'You know I'm not going to let you call the Crime Stoppers line just because you think.' Even back then I wanted this connection to Crime Stoppers. I wanted to help stop crime."

Carrizales grew up to be a police officer and experienced that "Crime Stoppers connection" seven years ago when she was shot in the line of duty.

Her shooter was arrested at the scene, but two others in the car escaped until a call went out to Crime Stoppers.

Dave reported on that story that evening.

"We have an update in the case of a shooting of a Stafford police officer over the weekend," Dave said on-air at the time. "Less than 24 hours after announcing an increased reward, a tip led to the arrest of the two remaining suspects in that violent traffic stop."

Carrizales made a full recovery and will forever be grateful to Crime Stoppers of Houston and ABC13's Dave Ward.

"I don't believe that there will ever be a way Dave will ever know all of the lives that he's touched, but I want him to know that he's touched my life," she said. "He's touched the lives of my family, not just my husband and my children, but my parents, my siblings, my grandmother, my aunts, my uncles and you know, I'm Hispanic and we have a big ol' family. So from the bottom of my heart, I have to say thanks to Dave for believing in something bigger than him and giving so much of himself to see it become fruitful. Thanks for being the man who is willing to reach out and empower other human beings."
Report a correction or typo
Related topics:
houstonsafetycrimehouston police departmenthoustoncrime stoppers
Copyright © 2021 KTRK-TV. All Rights Reserved.
CRIME
'Do your job': Murder victim's brother waiting for trial tells courts
16-year-old charged after waving gun in road rage case, officials say
Man accused of stealing women's underwear had previous conviction
Man wanted for robbing Houston mom in her garage
TOP STORIES
Couple robbed while unloading from trip, HPD says
EMT inside hijacked Houston FD ambulance hailed as a hero
Child fighting to survive crash that may have involved street racer
'Do your job': Murder victim's brother waiting for trial tells courts
Pattern change this weekend brings less rain, more dust and heat
No more balloon releases in Galveston? City considering a ban
Morgan Wallen speaks out on using a racial slur in 'GMA' interview
Show More
1 dead, 5 hurt in shooting at N. Houston bar
99.5% of Texans who died from COVID since Feb. were unvaccinated
Texas and Oklahoma could move to SEC in weeks, sources say
Pearland alcohol petition drive needed 15K signatures, and it got 18K
AL governor: 'Start blaming the unvaccinated' for rising COVID cases
More TOP STORIES News