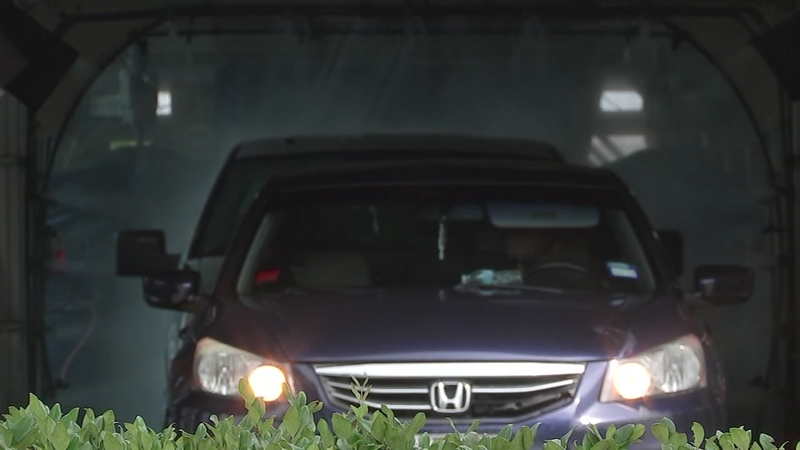 ROSENBERG, Texas (KTRK) -- A normal trip to a neighborhood car wash turned into a chaotic scene, with strangers rushing to try to save a woman pinned by a car.

"You see the Lexus, like, fly," Emily Stewart said. "Instead of hitting the brakes, he just gassed it."

"She got pinned," Valerie Chastain recalls. "She was in the wrong place at the wrong time."

Chastain and Stewart were at the Blue Wave car wash in the 6600 block of Reading Road Sunday when they saw a car speed in reverse, hitting several parked cars before shoving a woman's car, trapping her.

"I'm trying to help in any way possible," Chastain said

She ran to help, working with others to push the car away and free the victim.

"That much pressure against her," Chastain said, "Her body imprint was in the car."

"She was conscious for the longest time, and I was just like praying and hoping to God that everything would be fine," Stewart said.

While paramedics were on the way, they tried to comfort the woman and the elderly man who crashed the car.

"It was his wife's brand new car," Chastain said. "He was just getting it washed for her. He felt so bad."

Sadly, the victim died later at the hospital. Police haven't released her name or the driver's. No charges have been filed, but the investigation is ongoing.

The young women came back to the scene Monday afternoon, struggling to make sense of what they saw and asking if they did enough.

"I went and held her hand and said like, 'Are you ok?'" Chastain said. "She didn't understand. I just saw tears rolling down her face. It broke my heart."

They're not yet able to accept that sitting with the victim and praying for in her final moments may have made all the difference in the world.

"I feel so bad for her family," Stewart said.

"God bless those people. I can't even imagine," Chastain said.