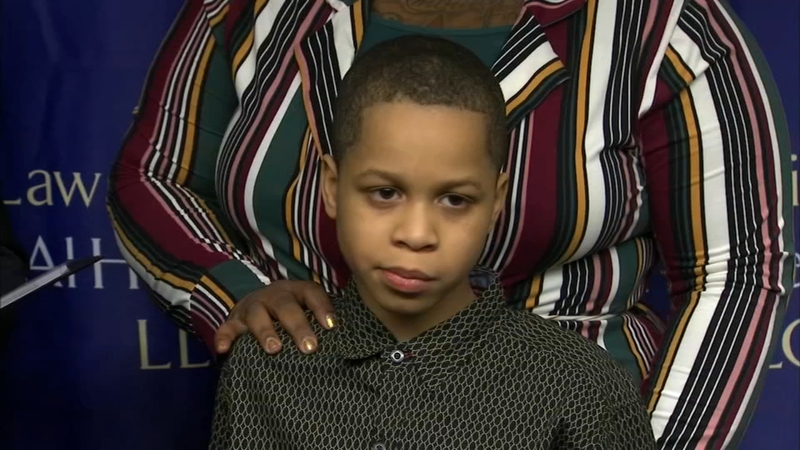 CHICAGO, Illinois -- A family filed a civil rights complaint Thursday against Chicago Public Schools, claiming their 9-year-old son was beaten with a belt at school.

According to the family's attorney, Al Hofeld Jr., they want to make sure this teacher never teaches again. They also want monetary compensation for their son and for him to be transferred to another school.

The family of 9-year-old Jo'Maury Champ filed a civil rights complaint in federal court Thursday against the Chicago Board of Education, CPS teacher Kristen Haynes and her 56-year-old friend Juanita Tyler.

The alleged incident occurred in September 2018.

Asia Gaines said her son was beaten with two belts by a stranger while at Tilton Elementary School. She said the belts belonged to her son's teacher.

"I am very angry about what happened to my son," Gaines said.

The complaint alleges that Haynes arranged for her childhood friend, Tyler, who is also a distant relative of Jo'Maury, to come to the school and drag the young boy from class into the bathroom and beat him dozens of times. The boy met Tyler once a few years ago, but to him, she was a stranger.

"The day before the beating, Jo'Maury had been laughing with another boy in Ms. Haynes' classroom and got in trouble with her," Hofeld said.

Hofeld said the next morning, Haynes and Tyler took the boy to a bathroom and then Haynes went back to her classroom.

"The stranger hit Jo'Maury with the belts approximately 20 to 30 times in total," Hofeld said.

When Jo'Maury returned to class, the abuse wasn't over.

"Ms. Haynes then threatened, 'you better be good because the lady is going to come back at 1 p.m.,'" he said.

"I think that's wrong. Shouldn't nobody - shouldn't no teacher bring anybody in to whup any kid. Should be fired," said Rebecca Perkins, a Tilton parent.

Hofeld said neither CPS nor the school let Jo'Maury's parents know about the incident. The family learned about it from the young boy.

The complaint also alleges Haynes had a history of using or threatening to use corporal punishment on students.

A CPS spokesperson released a statement Thursday, which said that every student deserves a safe learning environment.

"Every student deserves a safe learning environment and the district will not tolerate actions that place students in the way of harm. After learning of deeply concerning allegations, the district removed the employee from her position and launched a full investigation."
Report a correction or typo
Related topics:
chicagowest garfield parkbeatingcpschicago public schoolsteacherlawsuitstudents
Copyright © 2022 WLS-TV. All Rights Reserved.
TOP STORIES
'It was like a mad dash:' Clear Creek ISD senior set to graduate
Man dead after being shot during road rage incident, HCSO says
CDC recommends wearing masks indoors, ahead of Memorial Day weekend
Scattered storms move in tonight ahead of front
Murder suspect dead after found unresponsive in cell, sheriff says
Astros fan from Spring celebrates 95th birthday with favorite team
Child hospitalized after found 'unresponsive' at Splashtown
Show More
Runner dies after collapsing at finish line of Brooklyn Half Marathon
Global K-pop sensation Seventeen kicks it in Houston in new tour
'NFTs: Enter the Metaverse' | Trailer
Authorities search ends for man with felony warrant out for his arrest
Early Voting holds off Epicenter to win Preakness Stakes
More TOP STORIES News