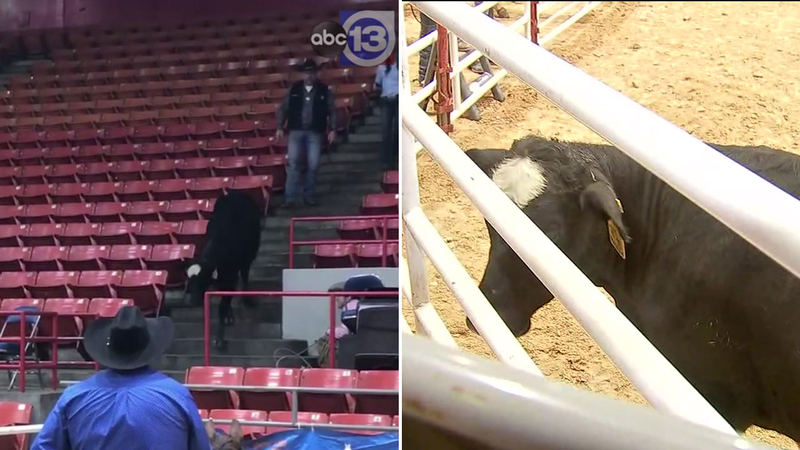 How did a calf get loose at RodeoHouston

HOUSTON, Texas (KTRK) -- It could have became calamitous, but a cow's great escape to the stands at RodeoHouston was more calm than commotion.

Volunteers inside NRG Arena, where a good deal of the livestock part of the Houston Livestock Show and Rodeo takes place, took their time rounding up the loose animal Monday morning. The bovine's exploits were captured in a video posted on Facebook.

In the video, the cow goes through a row of chairs, calmly walking in one direction. A volunteer tries to cut the animal off, causing it to do an about face and go the other way.

Cow escapes to stands inside NRG Arena at RodeoHouston

More volunteers try to corner the cow, which begins going down the aisle of stairs toward the arena floor and where its fellow livestock are being kept.
After several minutes of freedom, the cow goes into the pen on its own.

Rodeo officials identified the loose animal as a yearling heifer. There were no injuries with the calf or any spectators.

This was certainly not the first time an animal got loose at RodeoHouston. In stark contrast, a bull left its pen and ran wild around NRG Park back in 2010. It took a lasso rider on horseback and other volunteers to roundup the bull.

BULL ON THE LOOSE: Video shows chaotic escape from 2010 RodeoHouston

Cattle on the loose in northeast Harris County

The Conroe Police Department is trying to find the owner after a tiger was found wandering loose.