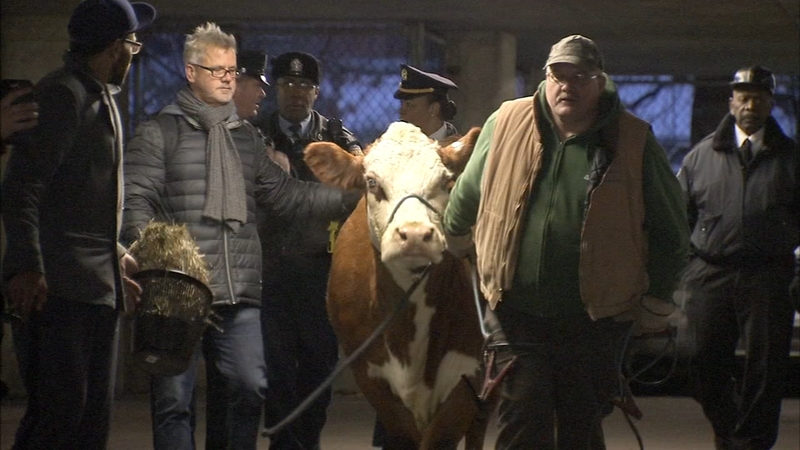 OLD CITY -- It was right around this time last year that 'Stormy' the cow broke free from a live nativity at a Pennsylvania church.

But this year, the congregation is doing something different.

The church says it wants to highlight today's immigration issues.

Last year, the church was criticized over the proper treatment of animals when 'Stormy' escaped.

If you've forgotten about 'Stormy,' let's refresh your memory.

Police received calls of a cow walking on I-95.

One of the state troopers who responded to the scene owned a horse and cattle ranch in South Jersey and knew how to handle the situation. They put a lead rope on the cow and walked her to a nearby parking lot with police vehicles in tow to shepherd 'Stormy' in the right direction.

From the lot, she was taken back to the church where she returned to her friends in the live nativity scene.

But 'Stormy's' journey did not end there! She made her second escape around 6:20 a.m.

At first, she got out into the churchyard and remained near the enclosure. However, moments later, 'Stormy' made her way onto the street right in front of the ABC News crew.

Reverend Michael Caine tried to urge the 1,500 pound 'Stormy' back into the yard, as ABC News reporter Katherine Scott called 911. Photographer Chuck Purnell alerted drivers of the cow in the roadway.

'Stormy,' a 7.5-year-old Hereford, then turned off one street and onto another.

The cow then made her way to the upper level of a parking garage where she was eventually cornered and returned back to the church.

Reverend Caine told ABC at the time that people had expressed concern about the animals being in the cold. Caine said the nativity scene has been part of the church since 1973.

He said there was a farmer on hand who cared for the animals and a veterinarian tech worked with them, as well.