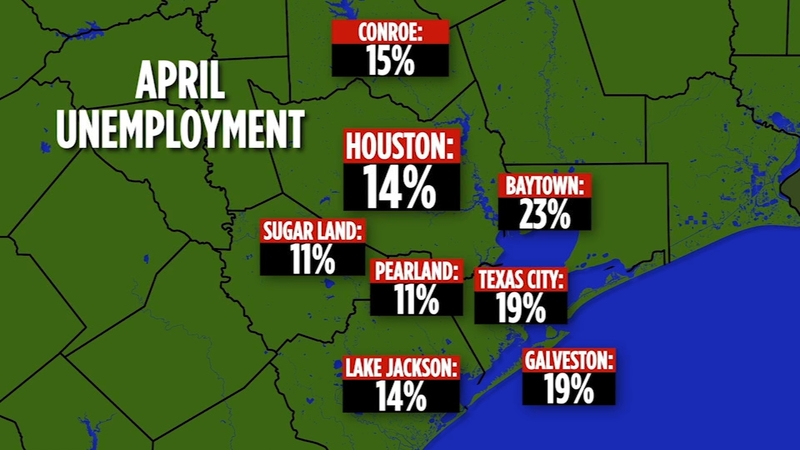 This week, Workforce Solutions unveiled unemployment rates for the area.

While the Gulf Coast region's unemployment rate was about 14 percent, some cities experienced much higher numbers.

Will Ivey knows the impact of the pandemic. His southwest Houston apartment looks empty after he had to sell his TV and couch to pay rent.

"It's mind boggling, to be honest with you," Ivey said. "It really breaks your spirit."

Ivey said he hasn't paid June's rent and his air conditioning unit went out weeks ago.

"It's a lot of running back and forth to the refrigerator to get water," Ivey said. "I've taken towels and put them in ice just so I can lay on them at night."

He told ABC13 the only thing that would help is him finding a job.

"I've done everything from picking up trash to day labor jobs, but even those are hard to come by," Ivey said.

In April, unemployment rates in our area ranged from 11 to 23 percent. The low areas included Sugar Land and Pearland with 11 percent unemployment. Houston hovered around 14 percent.

The high areas are Galveston, where unemployment hit 20 percent, and Baytown at 23 percent.

The biggest drop in ads are office sales, healthcare and management positions.

Ivey hopes the economy turns around like his apartment situation.

After ABC13 contacted the rental office, Ivey captured crews on the roof fixing his AC unit.