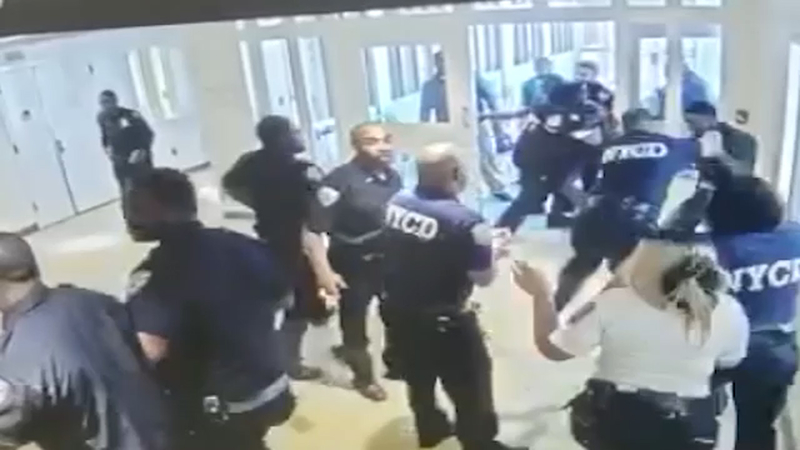 It shows the chaos as officers step in to break up a massive fight Wednesday morning at the facility in the Mott Haven section, which just opened on Monday.

The officers were hurt trying to get it under control, and union officials say all 20 officers were taken to local hospitals for treatment.

The union notes that correction officers can't use pepper spray at Horizon as they can at Rikers Island, so they must use force to get inmates under control.

"We can call them kids, whatever they want," COBA President Elias Husamudeen said. "This place has to be shut down until it can be made safe. It needs to be shut down. It wasn't ready October 1, and it's not ready today."

"So their answer is to just send more correction officers, to send more of us without our tools, without out equipment, without the things that we use to keep the violence down in the jails," he said. "Which is not the answer."

There was no immediate comment from the Department of Correction, but the Administration for Children's Services -- which operates both Horizon and the Crossroads Juvenile Center in Brownsville -- released the following statement:

"We are in a transitionary period for a historic reform that's never been done before, and there have been some incidents involving youth and officers, which were quickly addressed. None of the injuries were serious, but we take these and all incidents seriously."
Report a correction or typo
Related topics:
police officer injuredbrawlcorrection officercaught on videou.s. & worldsurveillance video
Copyright © 2022 WABC-TV. All Rights Reserved.
TOP STORIES
Timeline breaks down Uvalde shooter's movements day of massacre
16-year-old airlifted to hospital after being shot, deputies say
Warming quickly after our coolest morning in nearly a month
Onlookers urged police to charge into TX school: 'Go in there!'
Protests planned against NRA meeting following Uvalde deadly shooting
3 dead in apparent murder-suicide in NW Harris Co., sheriff says
TX school shooting leaves at least 19 children, 2 adults dead
Show More
Here's what to know about NRA meeting in Houston
Uvalde school shooting: What we know about 19 kids, 2 teachers killed
Beto O'Rourke confronts Texas gov. at Uvalde shooting press conference
Houston mayor after shooting in Uvalde: 'Our values are messed up'
HISD staff encourage talking with kids about Uvalde tragedy
More TOP STORIES News