Texas reports over 12,000 new coronavirus cases as the holidays arrive 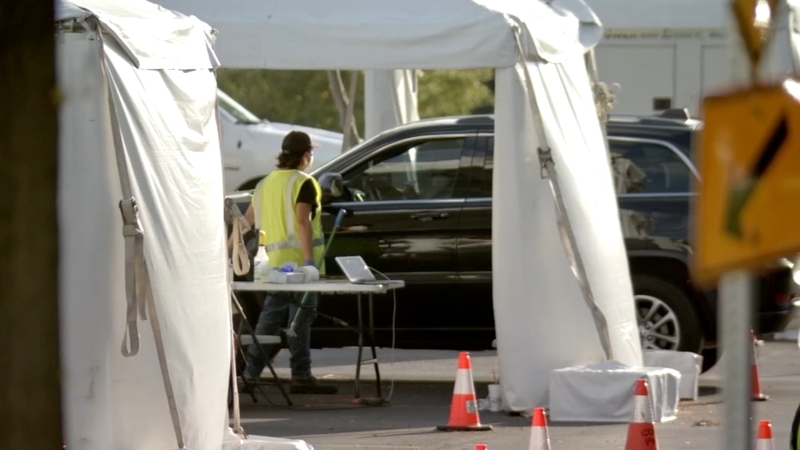 What you should know

On Nov. 26: The seven-day average of new cases continues to surpass 10,000, having tripled since the beginning of October. Testing is also at record levels. Meanwhile, the number of Texans hospitalized with COVID-19 has more than doubled in the same timespan. The situation is particularly dire in El Paso, and experts worry the holidays could exacerbate an already dangerous situation.

How we got here

Under Gov. Greg Abbott's plan to revive the economy, businesses started reopening in May. But Abbott paused further reopening plans and scaled back others in June, telling one TV station he regretted reopening bars too quickly.

As hospitalizations increased dramatically in June and July, Abbott issued a statewide mandate requiring most Texans to wear masks in public spaces, which experts say may have led to a plateauing of cases and hospitalization levels. In September, the numbers dropped to levels not seen since June, leading Abbott to loosen restrictions on restaurants, bars, and other businesses in regions of the state with steady hospitalization levels. But as cases and hospitalizations again rose, public health experts and local officials worried that loopholes allowing bars to reopen as restaurants were one reason behind the rise, as well as widespread fatigue.

Where are most of the cases in Texas?

As of Nov. 26, the state has reported 1,143,616 confirmed cases in 254 counties since the pandemic began. DSHS only reports cases of confirmed coronavirus cases in each county - the state does not include probable cases that are found with rapid-result antigen tests. These totals may differ from what county and city health departments report. The Tribune is measuring both the number of cases in each county and the rate of cases per 1,000 residents.

The rate of cases per 1,000 residents is high in the Panhandle's Moore County, where early outbreaks were tied to a meatpacking plant, and in counties with state prisons such as Childress, Walker and Jones. South Texas and the Coastal Bend emerged as hot spots in July, and counties with college towns, like Lubbock and Brazos, saw cases surge as students returned to campus in late August. The latest surge in October has been felt acutely in El Paso, Lubbock and Amarillo, with experts saying widespread fatigue has hastened viral transmission statewide.

On Nov. 26, there were at least 8,706 hospitalized patients in Texas with confirmed coronavirus infections. This data does not account for people who are hospitalized but have not gotten a positive test, and the Texas Department of State Health Services says some hospitals may be missing from the daily counts.

The state says roughly 2% to 6% of Texas hospitals do not report hospitalizations data each day. The average number of hospitalizations reported over the past seven days shows how the situation has changed over time by de-emphasizing daily swings. Nine percent or more of hospitals reported incomplete data, falling outside of the typical range of missing data

On April 9, the state started reporting the number of intensive care unit, or ICU, beds available in Texas hospitals. These specialized beds cater to patients with the most life-threatening conditions and include equipment such as ventilators and heart rate monitors. ICU units also have staff who are trained to care for the critically ill.

The percentage of hospital beds being used by COVID-19 patients in each trauma service region shows how the virus is currently impacting hospitals in different parts of the state. In regions where this is 15% or below, businesses are allowed to reopen further, if their county government opts in. Regions above this mark for seven consecutive days are disqualified.

The first death linked to the coronavirus in Texas occurred March 16 in Matagorda County. As of Nov. 26, 21,156 people who tested positive for the virus have died.

On July 27, DSHS began reporting deaths based on death certificates that state the cause of death as COVID-19 instead of relying on counts released by local and regional health departments. On that date, the state added more than 400 previously unreported deaths to the cumulative total. This does not include the deaths of people with COVID-19 who died of an unrelated cause. Death certificates are required by law to be filed within 10 days.

Because of this change, it's impossible to compare the rate of deaths before and after July 27.

How have the number of cases increased each day?

When looking at trends, the state relies on confirmed cases of the coronavirus, not probable cases, based on criteria published by the Centers for Disease Control and Prevention. However, DSHS may still accidentally include probable cases for certain counties. When found, they are removed.

Because the state does not include probable cases, these numbers don't include the results from tens of thousands of rapid-result antigen tests. Antigen tests are taken by nasal or throat swab like other viral tests, but results are much faster. DSHS reports statewide results from these tests on a separate dashboard.

Delays and backlogs in reporting can also create one-day surges when cases from multiple days are added on the same day.

How has the positivity rate changed?

The seven-day average positivity rate is calculated by dividing the average of positive tests by the average of total tests conducted over the last seven days. This shows how the situation has changed over time by de-emphasizing daily swings. Public health experts want the positivity rate to remain below 6% - and, ideally, to fall much lower.

In early May, Abbott said a rate of over 10% would be a "warning flag." The state doubled that mark in July before it dropped in August. The rate exceeded 10% again in late October.

On Sept. 14, DSHS began publishing a new version of the state's positivity rate, which takes into account the date a coronavirus test was administered. Previously, the state's rate relied on the date a test was reported to health officials and verified as a case, which sometimes caused the rate to swing wildly after officials input large numbers of older, backlogged test results.

How many people have been tested?

As of Nov. 25, Texas has administered at least 11,533,142 tests for the coronavirus since March. We do not know the number of Texans who have gotten a test because some people are tested more than once. The state's tally also does not include pending tests.

How is this impacting Texans of color?

Some regions of the state with the highest mortality rates are predominantly Hispanic. Hidalgo and Cameron counties, both along the state's southern border, have seen death tolls that rival larger and more urban parts of the state like Dallas and San Antonio. In El Paso County, more than 900 residents have died of COVID since the pandemic began, placing El Paso far ahead of other major urban counties in deaths per 1,000 residents.

Similarly, case data gathered earlier in the pandemic in various parts of the state shows the disproportionate impact of the virus on Black and Hispanic neighborhoods. Over the summer, the areas with the highest positivity rates in Harris County were predominantly Hispanic, according to a UTHealth School of Public Health analysis. In Dallas County, lower-income Black communities have also reported some of the highest positivity rates.