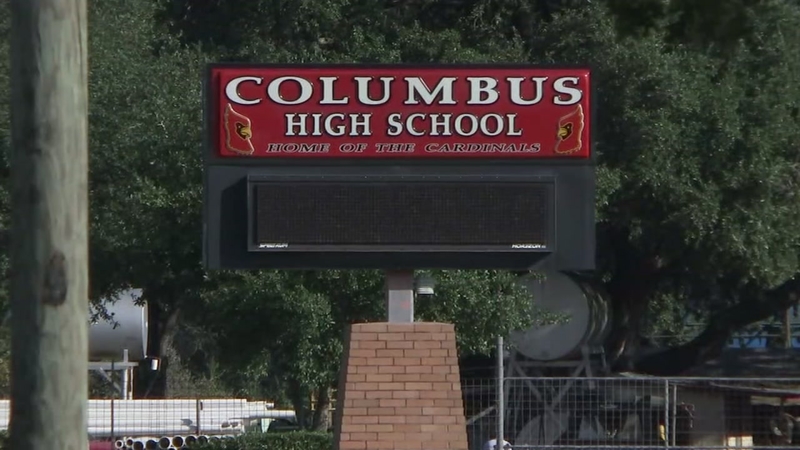 Student detained and charged for threats towards Columbus ISD

COLUMBUS, Texas (KTRK) -- A juvenile will be charged with a terroristic threat count charge after he allegedly made threats towards a Columbus ISD student, police say.

On Monday, Columbus ISD cancelled classes at all five of its campuses after the district became aware of a threat on social media, school officials say.

A message posted on the district's website says that the administration received word about the threat just before midnight.

According to the Columbus ISD superintendent, the threat was made via Snapchat, and reportedly named a student and mentioned an AK-47. Several students received the message and reported it to their parents. Parents then contacted the school district.

Officials determined the threat to be serious enough to warrant the closure of all five campuses in the school district, impacting 1,500 students and their parents.

In a press release, Columbus police said they had identified and detained the student who made the alleged threat.


"Columbus ISD takes the safety of our students and employees very seriously and it is our top priority. This situation has been turned over to the local law enforcement authorities, and Columbus ISD will continue to cooperate with our local authorities," the district said in a statement.

Columbus ISD also said that it hopes "the person who made the threat is [prosecuted] to the fullest extent of the law."

It thanked the students who saw the post for alerting parents and school authorities about it.

"It worked out beautifully, the way it's supposed to, because we don't want someone to keep this quiet. If you see something, say something," said Columbus ISD Superintendent Brian Morris.

Administrators say classes will resume on Tuesday, but after school activities are impacted today.

The district posted: "Due to the fact that our schools were closed today, we need to inform you of changes to after-school activities. All athletics practices have been cancelled for today. The junior high volleyball match has been moved to Thursday night in Columbus. The Greenhand supper has been moved to tomorrow night. Also, as a reminder, ALL visitors must be ready to show a picture identification to visit our campuses. Again the district is working with local law enforcement, as well as the FBI and the Texas Department of Public Safety - Texas Division of Emergency Management in trying to determine who made the threat. We will resume classes tomorrow at our regular times, with an increased police presence. Thank you for your support and understanding."

Eyewitness News reporter Charly Edsitty is working to get more information about the threat made in Columbus ISD.

This threat is just the latest made against Houston-area schools and the surrounding communities.

Last Friday, dozens of extra officers were at Texas City High School after a threat was discovered on the bathroom wall. No suspects were found and it was deemed not credible.

Extra police officers were at Texas City High School Friday after a threat.