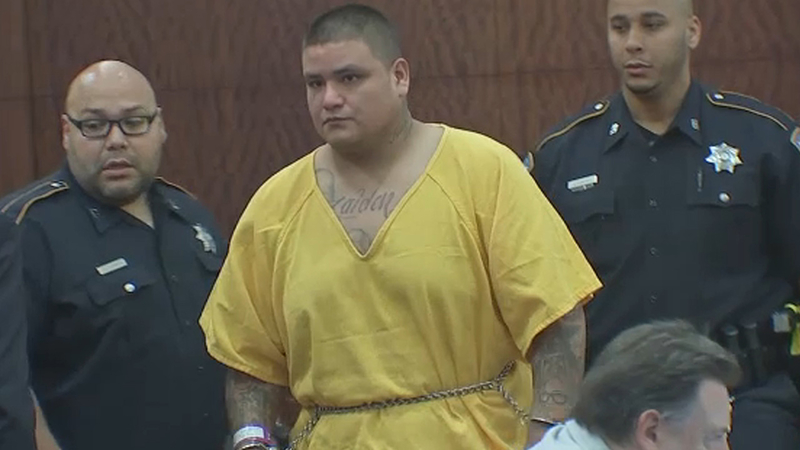 HOUSTON, Texas (KTRK) -- The man charged with tampering with evidence in connection to the death of 5-year-old Sierra Patino will remain in jail on bond, for now.

Attorneys for 30-year-old Santiago Esparza asked a judge to have his bond reduced Monday morning, but the prosecution argued Esparza is a flight risk because he previously discussed leaving the area.

On Saturday, the judge set Esparza's bond at $100,000 for the safety of the community based on his violent history and violent allegations in the case. Esparza has said he had nothing to do with the death of Sierra.

The mother of the little girl, 27-year-old Priscilla Nicole Torres, was also arrested in connection to the child's death, according to Houston police. Torres faces a felony charge of tampering with evidence, a human corpse.

If Esparza bonds out, he cannot have any contact with Torres and will have to wear an ankle monitor. He's also not allowed to consume any drugs or alcohol or have any weapons.

RELATED: Mom of 5-year-old left in closet didn't implicate boyfriend in fear he would retaliate: Prosecutors

Her next story was along the same lines, according to investigators, but Torres reportedly went back on her word that she was bathing Sierra. Instead, she said that it was Esparza.

"Her boyfriend offered to give the child a bath while the defendant made dinner," authorities explained. "The door was closed and upon opening the door, she observed her boyfriend with the daughter. She said daughter was exhibiting chemical burns to her extremities, also some redness and bruises to forehead."

Detectives say Torres wrapped the girl's body in a blanket and put her in a closet. Police say Torres told them she was too scared to call 911 after her daughter died because she feared CPS involvement. She allegedly said Sierra died from ingesting chemicals on Aug. 27, and her body had been kept in the closet until Labor Day.