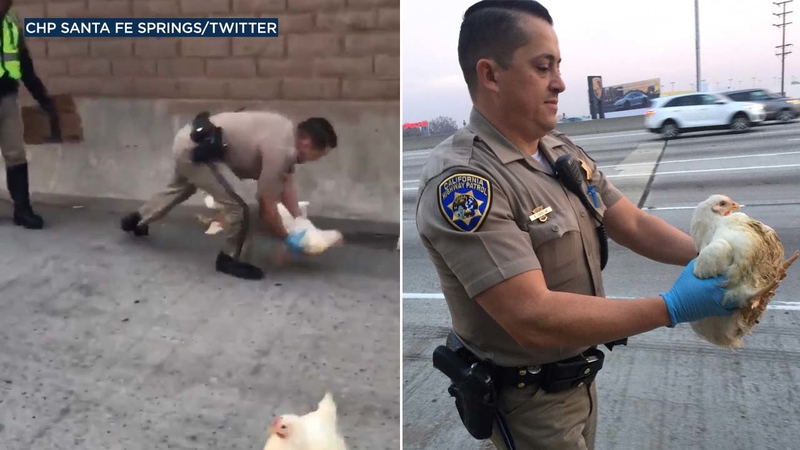 DOWNEY, California -- California Highway Patrol officers were on poultry patrol when a mishap resulted in chickens running loose on the 605 Freeway.

CHP officers had to stop traffic after at least 19 chickens were found running loose in lanes on the southbound 605 early Tuesday morning.

Here’s the video everyone’s been asking for. #ChasingChickensOnThe605. The freeway is no place for #FastFood! #WeLoveAnimalsToo pic.twitter.com/0mwJcdj9D6

A SigAlert was issued shortly before 7 a.m. as at least one lane of the 605 Freeway was shut down near Imperial Highway due to the incident. All lanes were reopened by around 7:15 a.m., according to CHP.

Officers found some cardboard by the side of the road to help them wrangle the chickens to safety.

CHP tweeted photos and video of the chickens in lanes and a motorcycle officer collecting them. Officers managed to collect 17 birds off the freeway. An additional two others had already died on the road. Of the 17 brought to a local animal shelter, seven had to be euthanized because of severe injuries beyond care from a veterinarian.

ICYMI, this morning: CHiPs rescuing chicks on I-605. “10-15 (Officer has in-custody) times 17...chickens, that is!” #WhyDidTheChickenCrossTheRoad #WeLikeFastFood but not on the freeway! Chicken-wrangling video in follow-up tweet. 🐓💨🚓 pic.twitter.com/cIoDHgNNx9

The owner of the chickens has until Jan. 6 to claim the animals, CHP said, citing the Southeast Area Animal Control Authority. After that, CHP said that any qualified person who lives in an area zoned for chickens may responsibly adopt them.

It still remains a mystery as to why the chickens were crossing the road.

"We have no trucks that stopped and no cages found on the roadway," said CHP Officer Jeremy Tolen. "So we're not exactly sure how they came to be on the roadway."