They are the highest ranking officials to call for invoking the 25th Amendment or impeachment after a mob of the president's supporters stormed the building.

"The president of the United States incited an armed insurrection against America," Pelosi said.

House Speaker Nancy Pelosi on Thursday joined those calling on the Cabinet to invoke the 25th Amendment to force Trump from office.

Pelosi cited Trump's potential to cause further harm to the country.

"Any day can be a horror show for America," she said.

Democrats and some Republicans want Trump removed before his term ends on January 20 with Democrat Joe Biden's inauguration.

"What happened at the U.S. Capitol yesterday was an insurrection against the United States, incited by the president," Schumer said. "This president should not hold office one day longer. The quickest and most effective way - it can be done today - to remove this president from office would be for the Vice President to immediately invoke the 25th amendment. If the Vice President and the Cabinet refuse to stand up, Congress should reconvene to impeach the president."

Multiple sources told ABC News that there have been discussions between some Cabinet members and allies about using the amendment as a vehicle to remove the president from office.

It was not clear how extensive those conversations have been, or if Vice President Mike Pence supports such action, according to ABC News.

So what exactly is the 25th Amendment - and what are the other options to have the president removed from office?

What is the 25th Amendment?
Section 4 of the 25th Amendment, which was passed in 1965 and ratified in 1967 in response to the assassination of President John F. Kennedy in 1963, provides a process for the involuntary removal of a president from power. It has never been tested.

Here's how it works

Learn more about this never used and somewhat complex method of removing a president.

In October, Pelosi unveiled legislation that would allow Congress to intervene under the 25th Amendment to the Constitution to remove the president, insisting at the time it was not about Trump but inspired by the need for greater congressional oversight of his White House after the president's COVID-19 diagnosis.

Pelosi raised questions about Trump's mental fitness soon after his COVID-19 diagnosis and demanded more transparency about his health. The bill in October would have set up a commission to assess the president's ability to lead the country and ensure a continuity of government. It came one year after Pelosi's House launched impeachment proceedings against Trump.

Political analyst Laura Washington discussed what could be next for President Trump.

Just weeks before the Nov. 3 election, with no hopes of the bill becoming law, the rollout was quickly dismissed as a stunt by Trump's team and top allies.

The legislation that would create a commission as outlined under the 25th Amendment says the vice president and a majority of principal officers of the executive departments "or of such other body as Congress" may by law provide a declaration to Congress that the president "is unable to discharge the powers and duties of his office." At that point, the vice president would immediately assume the powers of acting president.

Jon Karl has more on a potential third option to remove President Trump from office. 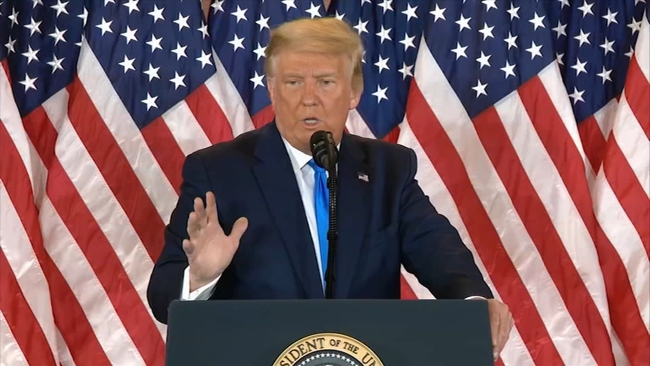