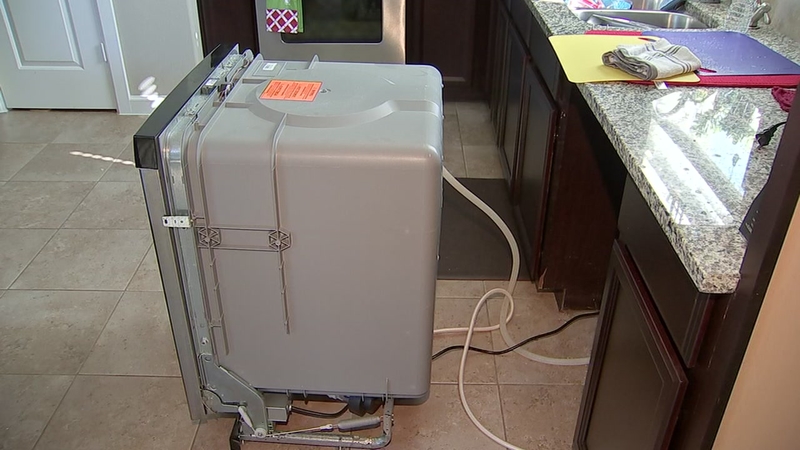 HOUSTON, Texas (KTRK) -- This will not be the holiday Claudia and Patrick Morrissey had planned.

"We were gonna have family over Friday for Christmas, now it's like, we might have to move that somewhere else," said Patrick.

That's because of a mysterious problem they say developed at their Grand Mission home, and that of two next door neighbors early yesterday.

"The odor of burning wires throughout the house, that was the - we were walking around shoving our nose into every outlet trying to find what's burning."

What they found wasn't good. Patrick described their malfunctioning refrigerator.

"Right when you opened it up you could feel the heat and you couldn't touch it."

There's a dark mark on the back of the refrigerator and the wall it was against. Items like their microwave, bedside alarm clocks and the outlets are all seemingly broken or malfunctioning. Two houses away, neighbor, Ali Vijdan's power was malfunctioning as well. He and Patrick went to see what was going on at the neighbor's house in-between.

"It was all smoke, his dogs were kind of freaking out, because of the smoke," said Ali.

What happened? As it turns out, CenterPoint had a problem with a transformer and released the following statement to Eyewitness News:

"On December 19, CenterPoint Energy crews responded to a call in the Richmond area at 4:00 p.m. Crews determined that a transformer had failed and was causing voltage fluctuations. Consequently, six houses were affected. The transformer was replaced and power was restored at 7:32pm the same day. Our claims department is working closely with each customer to evaluate their damages."

Patrick says he's having his entire home and all appliances checked because he's still nervous about the possibilities.

"We want to make sure it's still safe and sound."