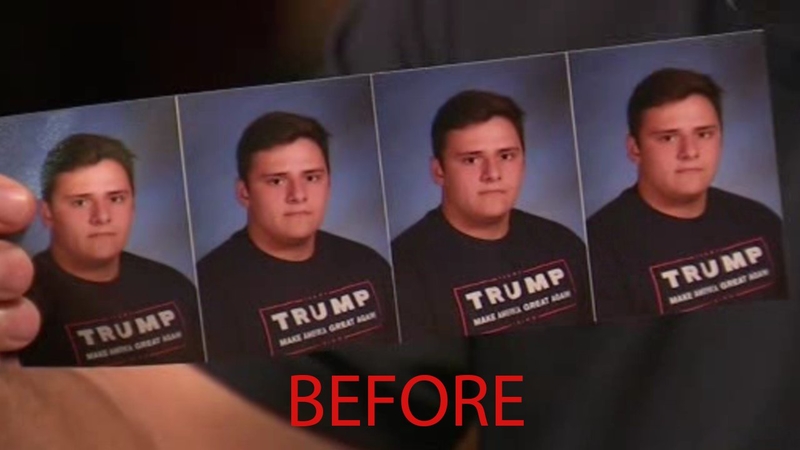 Revised yearbook will be issued after political censorship claims

In a letter to parents, Wall Township School Superintendent Cheryl Dyer said she has not been able to determine why it happened, but she knows in some cases how it happened.

It started with junior Wyatt Dobrovich-Fago's Trump sweater vest. While his picture wearing the vest was published, the logo was gone.

"Maybe they just cropped it out, and it wasn't something I should worry about," he said. "They just did it."

But then his sister Montana, the freshman class president, was left wondering whatever became of the Trump quote she submitted.

"'I like thinking big, if you're going to be thinking anything, you might as well think big,' by Donald Trump," she said, recounting the quote. "I sent it in on time. Everything was good, and it wasn't there."

Another student wore a t-shirt emblazoned with the words "Trump Make America Great Again" that was also mysteriously absent.

Dyer said in her letter that some of the changes were intentional, while it appears others were not. She wrote that one photo was intentionally altered even though the shirt the student was wearing did not violate the school's dress code, while the other photo was resized to match others and it does not appear that was intentionally done to remove Trump's name. Dyer hasn't been able to determine why the quote wasn't included.

The teacher who was the yearbook adviser has been suspended with pay.

"I cannot allow the intentional change that was not based on dress code to be ignored," Dyer said in the letter. "I take responsibility for the actions of those who are employed here."

The corrected yearbooks should be available in about two weeks, and Dyer said she will insist "checks and balances be implemented to ensure that intentional alterations that are not consistent with district policy do not continue."

President Trump received nearly 63 percent of the vote in the township, while Democrat Hillary Clinton won the state in last year's election.

Here is the full text of Dyer's letter:

People across the country, and in some cases around the world, have been talking about Wall Township High School and the allegations of censorship and violation of First Amendment Rights due to the alteration of photos and omissions of text in the 2017 yearbook. This issue was first brought to my attention on Thursday evening, June 8th by the parents of three students.

I was deeply disturbed by the allegations; however, I have not yet been able to determine why this happened. In some cases I know how it happened; but, I think the issue is really about why it happened. There are different types of mistakes that people make in life. That includes adults as well as students. Some mistakes are unintentional.

Mistakes can be made due to carelessness or lack of attention to detail or lack of sufficient proofreading. Other mistakes are intentional. I am aware of the following mistakes in the yearbook that I am taking action to correct:

--The shirt worn by one student was altered using digital technology and his support for President Trump was
removed. This was intentional.

--The vest worn by another student was resized in the same manner as all of the other underclass photos and in
doing so the name of our President was no longer visible. The fact that "Trump" was no longer visible in the yearbook photo does not appear to be intentional.

--A quote submitted by a class president was not included even though it was submitted on time. I do not know if
this was an oversight, carelessness or intentional.

--A photo of a junior was not included. I do not know if this was an oversight, carelessness or intentional.

--A senior has his eyes closed in the picture even though other photos with his eyes open were available. I do not
know if this was an oversight, carelessness or intentional.

--Several pictures from the Bermuda trip were altered to add or extend clothing on students. This was intentional
and I have not been provided with a reason at this time.

That being said, I cannot allow the intentional change that was not based on dress code to be ignored. I am the Chief School Administrator in this district and I take responsibility for the actions of those who are employed here. Therefore, I have determined that a reissuance of the yearbook is necessary. The mistakes that are identified above will be corrected in the reissued yearbook which should be available in about two weeks. I am not able to have the Bermuda trip pages redone.

Parents and students will be notified via the Blackboard Connect system when the books are available for pickup. If you purchased a book, you will be able to receive a revised one.

I sincerely apologize for the mistakes that were made (intentional and unintentional) and I assure you that I will be insisting that checks and balances be implemented to ensure that intentional alterations that are not consistent with district policy do not continue and unintentional mistakes from carelessness, lack of attention to detail or lack of sufficient proofreading are minimized.

Enjoy your summer and the memories of this school year. Best wishes to the seniors and I look forward to seeing the
underclassmen in the fall.