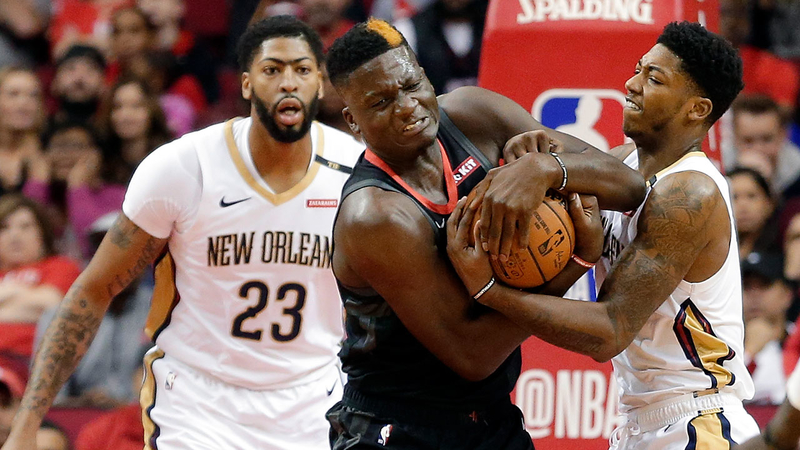 HOUSTON, Texas -- Anthony Davis had 32 points, 16 rebounds and eight assists while Nikola Mirotic scored 30 points to lead the New Orleans Pelicans to a 131-112 win over the Houston Rockets in their season opener on Wednesday night.

Davis added three blocks and three steals, while Mirotic shot a sizzling 6 of 8 from 3-point range, and Julius Randle had 25 points off the bench.

Eric Gordon led the Rockets with 21 points off the bench, while P.J. Tucker and Chris Paul both added 19 points. James Harden had 18 points, 10 assists and nine rebounds.

The Pelicans dominated the first half, taking an early lead and never relinquished it as they hammered the undersized Rockets in the paint. New Orleans led 71-54 at the break and led by 29 points in the second half.

The most points Houston allowed in regulation last season was 129 points in a 129-113 loss to Toronto, also allowing 142 in a double-overtime win over the Lakers.

Defense was a major question mark for the Rockets entering the season after losing Trevor Ariza and Luc Mbah a Moute in the offseason as well as the September retirement of former associate head coach Jeff Bzdelik, effectively Houston's defensive coordinator the past two seasons.

Coming off the bench for Houston with seven minutes remaining in the first quarter, Rockets offseason pickup Carmelo Anthony received a standing ovation when he entered the game wearing his trademark headband and the No. 7. Antony made his first two shot attempts, the first, from 3, and finished 3-of-10 shooting for nine points in 27 minutes off the bench.

The Pelicans opened their season with a win for the first time since the 2014-15 season.

All five Pelicans starters scored in double figures as E'Twaun Moore had 21 points, and Jrue Holiday and Elfrid Payton both adding 10 points.

Houston went 3-1 against New Orleans last season and had won 11 of the past 14 meetings entering Wednesday.

Rockets: At Lakers on Saturday.