Family remembers HPD cop before killer is set to die 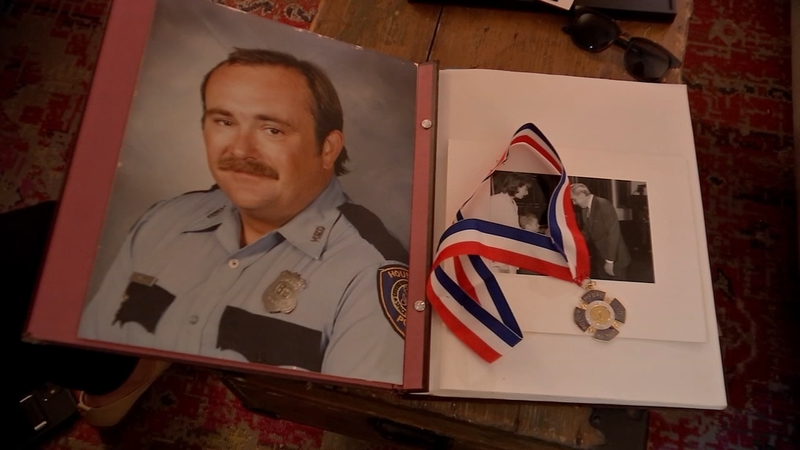 Thirty-two years after Houston police officer James Irby was murdered, his killer is set to die.

Carl Wayne Buntion, 78, will be executed on April 21, unless state officials intervene. Buntion is currently the oldest person on death row in Texas.

"I hope we can close the book -- not on Jim, obviously," Maura told Eyewitness News. "He was the love of my life, the father of my children. But, not having anything over our heads that we can't predict... I feel relieved."

Maura says she'll be in Huntsville Thursday but she's not sure she'll be present when Buntion is lethally injected.

"I won't lie, I'm still kind of conflicted," Maura says. "I've been a nurse for 35 years. My whole life has been spent saving lives, helping people. So, the idea of condoning taking a life has been challenging."

On June 27, 1990, HPD motorcycle officer James Irby pulled over a car for a traffic stop in north Houston at the intersection of Airline Drive and Lyerly Street. Buntion was sitting in the front passenger seat. As Irby was talking with the driver, Buntion got out of the car and shot Irby in the head. When Irby collapsed, Buntion shot him twice more in the back.

Buntion was captured in a nearby warehouse after shooting at three more people, including two witnesses, while running from police.

Buntion was out on parole when he murdered Irby. At the time, Buntion already had a long criminal history. He had been previously convicted of burglary, robbery, and sexually assaulting a child, one year before killing Irby.

"I went into the ER and it was a sea of blue uniforms. All of them (officers) were sobbing and crying...and they told me he was gone. They told me he had been shot," Maura says, remembering the day her husband of four years was murdered. "It wouldn't be real if I couldn't see what actually happened so I started taking the dressings off him so I could see what that man had done to my husband, the father of my children. After that, there's not a lot I remember."

At 29, Maura was a newly single mother, left to raise the couple's son Cody, 3, and daughter Cally, 1, alone.

"It's hard to quantify a loss that's so great that your mind balks at its measure," says Cody Irby, now a father with children of his own. "You feel like something is missing, always. There's not a single day that goes by that you don't think about it. You learn to live with it, you learn to live above it, but it's always there."

"I think my family has been through enough," says Cody. "As a society, we've paid long enough for this man to remain alive. We can't do anything else with him. If we release him into the public, he will harm somebody."

Two weeks ago, Buntion's attorneys made final attempt to save his life, filing a 43-page appeal. In the paperwork, the attorneys argue Buntion's death sentence was initially based on speculation of the jury that he would "probably commit violent acts in the future." The attorneys point out Buntion hasn't had any "disciplinary infractions" in the past 23 years.

"I absolutely believe Carl Wayne Buntion is as evil today as he was in 1990. One hundred percent," Cody says.

According to the Harris County district attorney's office, Buntion was a member of the Aryan Brotherhood of Texas prison gang. Prior to Irby's capital murder, Buntion had 13 prior felony convictions.

After 31 years on death row, as the oldest person to be there, Buntion's attorneys also argue there is "no legitimate purpose for the death penalty."

"It's not about revenge," Maura says. "It's about closing the chapter and finally letting my husband rest in peace and letting my kids and I start a new chapter."

The Irbys are slowly starting to do that.

Cody, once a police officer in the Austin area, is retired now. He's spending more time with his children -- something Cody's father had started planning for when he was murdered. Irby had just handed in his retirement paperwork weeks before being shot, Cody says.

"Knowing what happened to him was a driving force...to leave," Cody says. "My kids aren't going to grow up that way. I know exactly what it's like. It's fast. It's scary. One simple decision made by the wrong person is a butterfly effect. Multiple peoples' lives will be effected by those choices. We're the prime example of it."

Carl Wayne Buntion is set to be executed Thursday, April 21 at 6 p.m. in Hunstville.

You can watch part of Maura and Cody's raw interview as they remember officer James Irby in their own words, by clicking on the video below.