Armed, masked thieves caught on camera stealing out of cars in Huffman area 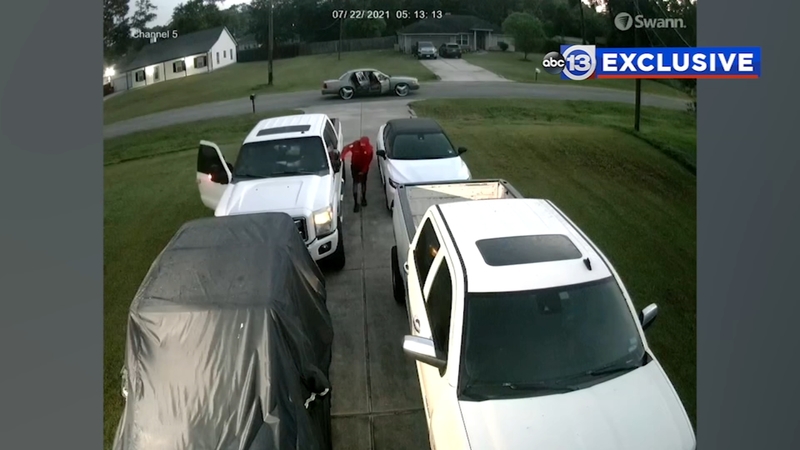 HUFFMAN, Texas (KTRK) -- Armed thieves were caught in the act by a woman's security camera as they broke into parked cars in a northeast Harris County neighborhood.

The suspects were both reportedly wearing ski masks to cover their faces, and one was seen carrying what appeared to be a handgun.

The victim, who asked to stay anonymous, said she lives in a neighborhood in the Huffman community.

She said she went to check her surveillance camera on Thursday morning once she realized her cars were broken into. What she discovered was terrifying.

An after seeing an increase in auto thefts, HPD says it is increasing the number of officers patrolling the garages and making arrests.

"This happened before," she said. "But, this is the first time I saw ski masks and guns."

In the surveillance video exclusively obtained by ABC13, two men got out of a car and walked right up her driveway in broad-daylight.

One of the two suspects was dressed in all black. On camera, it appears he was holding a firearm.

"I see him get into my fiancé's truck first," she said. "And then, as soon as he turns around the corner, you can see he clearly has a gun in his hand."

The woman said her two young children were home sleeping at the time which is why she's been on edge.

"Both my kids were sleeping, and it was early in the morning," she said. "You have two guys that have guns and ski masks in your driveway, and you're in your house. It's a concern."

"I can't believe that three kids all had guns," the resident said as he described his violent confrontation with three armed thieves.

The suspects were able to get inside the cars easily because the doors were unlocked. She said the men also targeted other vehicles in her neighborhood.

"Make sure your vehicles are locked because it's easy to forget," she said. "My fiancé came home at one in the morning and just forgot. You're getting your groceries out, your children out. Sometimes you forget to lock your vehicles."

The thieves didn't get away with much which is why she believes they are looking for something specific.

"I think they are looking for firearms because they left several valuable things like AirPods, dash camera, radar detectors," she said.

After posting the surveillance video to social media, others quickly recognized the car roaming around their neighborhood.

The victim said she wants to spread awareness so others can stay vigilant and be careful.

"The fact they came with guns means they are not afraid to confront you," she said. "If you see this vehicle, and you are going to confront them, then be careful because they are armed."