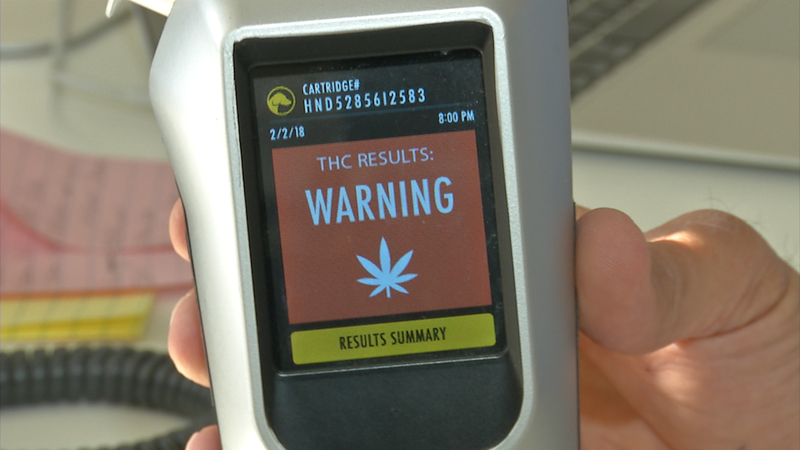 OAKLAND, California -- Since recreational cannabis became legal in 2018, the California highway patrol says arrests and injuries from drivers getting behind the wheel stoned has increased, but there are no consistent standards for determining when a driver took that cannabis, until now. One Bay Area company says it can now narrow down when someone is too stoned to drive.

At DUI checkpoints across the state, police are seeing an increase in the number of drivers getting behind the wheel stoned. According to the California Highway Patrol, driving under the influence of marijuana arrests have increased 31 percent and injuries related to people driving under the influence of marijuana has increased 102 percent since recreational cannabis was legalized.

RELATED: New Texas hemp and CBD law could snuff out marijuana prosecutions
But determining how stoned a driver is has eluded police. If they suspect someone is drunk, police can use a breathalyzer. But no such device has proven itself useful for cannabis consumption.

Dr. Mike Lynn is an emergency room physician and reserve deputy sheriff. He is also the founder of Oakland-based Hound Labs, makers of world's first breathalyzer to measure recent marijuana use and alcohol in the breath.

"When you can find THC in breath, and that can require some incredibly sensitive tools, but when you can find it, then you know that the person used very, very recently," said Dr. Lynn.

THC is the psychoactive component of cannabis that makes you high and can impair a driver's reaction. Hound labs worked with UCSF on a study published last month. It concluded that THC can be found in breath.
"We found THC in all twenty test subjects, and what was really interesting, is that the THC peaked at about 15 minutes, and then it went out of the breath within two to three hours," said Dr. Lynn.

He says because cannabis is legal in California, tests that check for the presence of cannabis in hair, for example, are less useful to law enforcement. Police are now focused on whether someone is impaired at the time of arrest, not whether someone has used the weed in the last three months.

Hound Labs own road tests show that the first two to three hours is the period when a driver is at the greatest risk for being impaired.

Dr. Lynn says this new data could help clear people who are suspected of being high but are not.

"The good thing is that if it is not in your breath, then you are very unlikely to have used recently," said Dr. Lynn.

Hound Labs recently secured $30 million in funding to accelerate manufacturing and will begin rolling out their breath tests to several law enforcement agencies around the state by the end of the year.