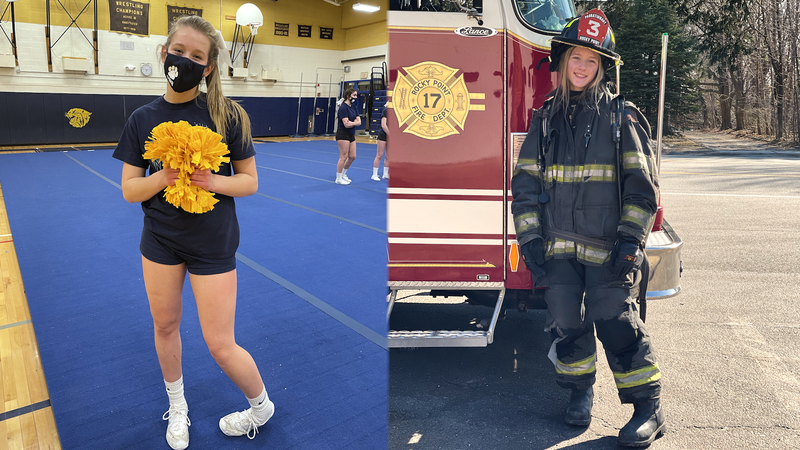 Little did she know that one of her neighbors would be her current fire chief today, who encouraged her three years ago to join the Rocky Point Fire Departments' junior program.

Thrash decided to try it, and she ended up falling in love with the firehouse.

Through her involvement and commitment to the station, she leveled up to a probationary volunteer firefighter at the Rocky Point Fire Department Shoreham Company 3.

"Catlin was very special right when she walked through the door because she had a very positive attitude about everything," said Rocky Point Chief of Department Fred Hess. "For a female of her age, she accepted that role and excelled in it, which gained her the reputation that she has today when she came inside the fire department."

When she is not at the firehouse, you can find her practicing with her squad or cheering on the field with the Shoreham-Wading River High School Varsity cheerleading team.

"I think keeping busy is so much better than just like sitting around," said Thrash. "I love to stay busy and stay moving. I love to have plans, and I think if I didn't do this much, I mean I would be bored."

Thrash's cheerleading coach, Brie Carlen, has known about her involvement with the fire department but is still amazed at how Thrash can keep up with it all.

"Honestly, she's just living proof that you need to be tough to obviously be a firefighter and a cheerleader," said Carlen. "Cheerleading is such an involved sport you really need to have the strength, the endurance, and all the things she also needs for the firehouse."

Thrash loves that she can depend on her cheer squad and firehouse brothers for continuous support throughout her journey, balancing her extracurriculars.

"It's unique when you have people that come through the door like that and make an impact," said Hess. "It doesn't happen a lot, but as long as we have her, we are going to embrace her. We are going to push her to be better. It's nice that we don't have to push too much because she wants to be better all the time. We may lose her, but as long as we have her under these four walls, we're going to take care of our little sister and get her whatever she needs to get done."

Thrash didn't see herself as a role model at first.

All she wanted was to get the job done and continue to learn how to be a better firefighter.

Related: Meet the teen chef sensation who's now a sous-chef at a Long Island restaurant

However, she now understands how someone in her situation could pave a path for future females to be involved in this role.

"I never really saw myself as like being an inspiration to others, but I guess it's true," said Thrash. I'm 17-years-old and working with all these other guys who are much older than me and - being one of the only females - I think is cool. I hope I can inspire other girls to join the fire service and just younger people in general. Girls definitely have a place here."