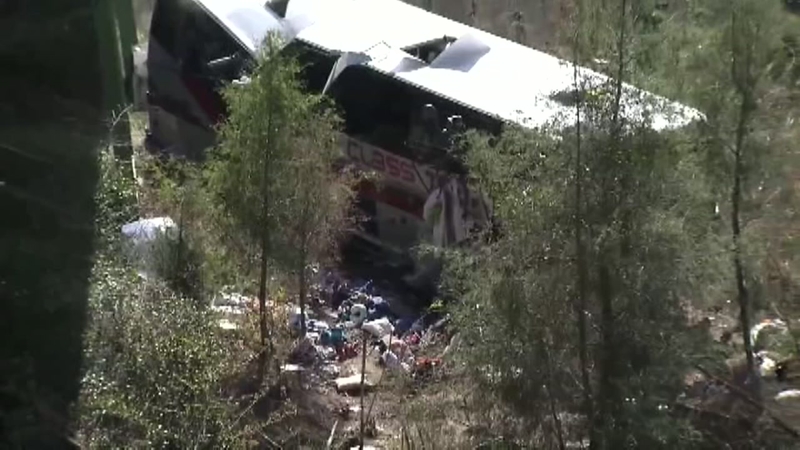 LOXLEY, Alabama (KTRK) -- Lulled asleep by the humming of their Texas-bound charter bus following a trip to Disney World, members of a high school band were jarred awake before dawn Tuesday when the rig ran off a highway and plunged into a ravine more than 50 feet (15 meters) deep.

One person died, driver Harry Caligone, and about three dozen others were hurt, mostly teenagers, authorities and the bus company said. Interstate 10 was blocked for hours where the accident occurred between Mobile, Alabama, and Pensacola, Florida.

First look at Harry Caligone, the man who was driving the bus carrying @ChannelviewISD High School students from Disney. He died after the bus crashed into a ravine. https://t.co/MxizCjC4P2 pic.twitter.com/RQYpLnRyCL

The cause of the crash wasn't immediately known, but survivors from Channelview High School in metro Houston described being asleep one moment and tumbling through the air the next.

"Then there was a loud, really huge crash that was presumably when the bus finally came to a stop," Frances Dodson-Benson said after talking to her 15-year-old son DeWayne Benson. "There were students on top of students, the bags, it was just a disarray, a lot of commotion, a lot of panic."

First responders used ropes to rappel down the ravine in the middle of I-10 and then had to cut some of the victims from the wreckage, said Baldwin County Sheriff Huey Hoss Mack.

Channelview ISD released a statement about the crash Tuesday morning:

First and foremost, our thoughts and prayers go out to our students, employees and families that have been affected by this tragedy. As you are well aware, a charter bus carrying Channelview High School band students was involved in an accident returning from Florida early this morning. At this time, we have been able to confirm that 40 students and 6 adults from Channelview were on the bus at the time of the accident. We are aware of numerous injuries. We are now focused on getting everyone back safely to our community. We are extremely grateful for the first responders, hospital employees, and volunteers from churches and schools in Alabama and Florida that have stepped up to help our students and comfort them through this difficult situation. Those communities have opened their hearts and arms to our children and employees. They have provided resources, support, and a safe and welcoming environment while we work through the logistics of reuniting our families.We also want to thank our state and local officials who have all reached out to help us. Governor Abbott, Senator Sylvia Garcia, Commissioner Jack Morman, Representative Ana Hernandez, and Precinct 3 Constable Sherman Eagleton have all reached out to offer support and assistance.

The Channelview Independent School District said 40 students and six adults from the school were on board the bus. State troopers said the driver was killed, and medical officials said at least 37 people, most of them teenagers, were treated at hospitals or other facilities in Pensacola and southwest Alabama for injuries that ranged from minor to very serious.

The sheriff said it wasn't immediately clear what caused the bus to enter the grassy median, which abruptly ends at a steep embankment where the interstate passes over Cowpen Creek. First Class Tours Inc., the bus operator, identified Caligone as a longtime driver with the company.

The crash happened around 5:30 a.m., crunching the bus and leaving the passengers exposed to chilly temperatures.

ABC13's Foti Kallergis talked to a Channelview student who was on the bus at the time of the crash.

Josh Torres said his 17-year-old sister, Bianca Torres, was sitting at the rear of the bus when the impact of the wreck tossed her forward several rows. She had pain in her legs and bruising but was otherwise unscathed, and taken to a hospital for evaluation, he said.

"All that she remembers is that she felt a bump, then a crash and then the bus flipping onto its side," Torres said.

Reporter Foti Kallergis talks to the mother of a boy who was on the bus at the time of the crash.

Jesus Tejeda came upon the scene as he drove to work, finding dozens of police cars and ambulances stopped on the highway near the overpass. He looked down to see the bus lying on its side near the base of a concrete embankment, its front end crumpled.

Tejeda said he watched four people being removed from the wreckage, and couldn't hear any yelling or sounds of panic. "Thank God they were alive but (they) had to take them on (a) helicopter," he said in an interview conducted by instant messages.

Norman Haynes of Victoria, Texas, said his daughter, 18-year-old trumpet player Makena Campa, was on the bus with her mother. He spoke with both of them after the crash and was on his way to the hospital.

"My daughter was really groggy because they had her on some very heavy pain medication," he said. "They sounded kind of shook up. I think I'd be shaken up as well."

"Everybody is being transferred to a hospital to at least be checked out," said Elliott.

Torres said his brother, also a member of the Channelview band, was on another bus not involved in the accident. That bus stopped after realizing what happened but did not allow the students to get off, and eventually continued on to Channelview, a Houston suburb of about 38,000. It arrived at the high school there Tuesday afternoon with a police escort.

Outside their high school, still closed for spring break, police were stationed at every entrance and no one was available to speak.

Only hours before the crash, the band's Facebook page had been updated to show a large group posing outside Disney World, where the band performed at a music festival Saturday.

Channelview Independent School District spokesman Mark Kramer said the district was in contact with law enforcement in Alabama to get more information.

The bus charter company pledged to help local authorities investigating the crash in a statement that offered prayers for injured and their families. The Federal Motor Carrier Safety Administration gives First Class Tours a satisfactory rating, meaning that records show no evidence of substantial non-compliance with safety requirements.

Federal Motor Carrier Safety Administration records show that in the last two years, the carrier has been involved in four crashes prior to Tuesday's crash, with one of those one involving one fatality.

The previous crash involving a fatality took place in May 2017 in Houston, when a bus failed to yield the right of way as it turned left and fatally struck a pedestrian in a crosswalk, according to a police report.

First Class Tours released the following statement about the crash:

A serious accident has taken place involving a First Class Tours bus in Alabama this morning. The bus was carrying a group of band students from Channelview High School who were returning home to Houston from Orlando. Regrettably, the accident has taken the life of the driver of the bus, Harry Caligone. Harry was a long-time driver for our company and we are deeply saddened by this loss. We offer our heartfelt condolences to his family. It is our understanding that there are additional injuries as a result of the accident. Our prayers are with the injured and their families at this time. We pledge our assistance in cooperating with local authorities in the investigation. Presently, this is all the information that we have to share. We will provide updates as additional information becomes available and it is appropriate to do so.
Report a correction or typo
Related topics:
alabamachannelviewbus crashu.s. & worldstudents
Copyright © 2022 KTRK-TV. All Rights Reserved.
TOP STORIES
Deputy constable shot and killed in southwest Houston
3-year-old drowns in pool in NW Harris County, sheriff says
COVID-19 patient at center of ventilator fight dies in Texas
Woman found in a ditch after a hit-and-run
Grab the umbrella! Widespread showers move in Monday
Houston car chase: Harris County deputies tase a man evading arrest on 249 in northwest Houston
Former Houston Oiler takes over Prairie View A&M football
Show More
Family demands justice after 23-year-old woman found dead after date
Tax filing season starts Monday. What to expect for 2022
5 tax changes that can boost your refund this year
Sen. Kyrsten Sinema formally censured by Arizona Democratic Party
Man charged in fatal shooting of father outside Humble Chuck E. Cheese
More TOP STORIES News