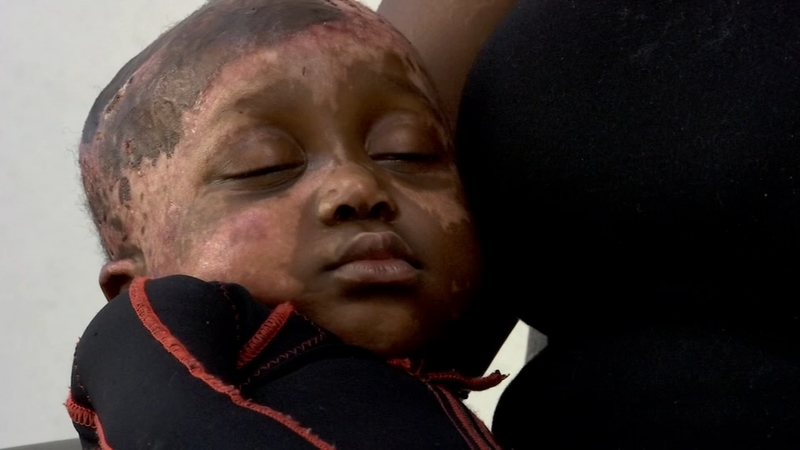 GALVESTON, Texas (KTRK) -- Shriners Burn Hospital of Galveston is home for the time being for Jasmin Wolford, Reginald Smith, and their two young sons, 2-year-old, Messiah and 1-year-old, Bentley.

Reginald and the two boys were burned after a road rage incident on W. Mount Houston Road on July 4, when deputies say 18-year-old Bayron Rivera shot at their car, igniting fireworks inside.

Rivera is now charged with four counts of aggravated assault. Reginald recalls trying to pull Bentley out of his car seat.

"I'm digging in there and I feel him touching me, screaming, screaming like, please help me, get me out of here, so, I'm like trying to calm him down in a fire, to a baby that's burning," says Reginald.

Good Samaritans took the family to a nearby emergency room where they were taken by helicopter to Shriners Hospital. They've been there ever since.

"To go from like getting up and going, to not being able to take a step, to watch them struggle to do that, was very hard," says Jasmin.

Although recovery will take a while, the family is in good spirits.

Jasmin says, "This is not the end, it's kind of a new beginning."

They say they're thankful for everything Shriners has done for them.

"Through the grace of God and through this hospital, they're able to walk again," says Jasmin.

She says there's no telling how long they'll stay at Shriners, but says the hospital will work with the two boys until they're adults.

A GoFundMe page has been set up to help the family medical expenses.