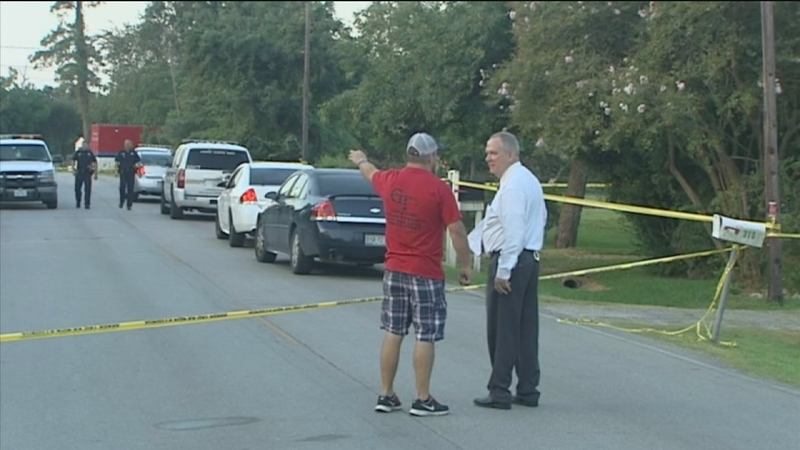 CHANNELVIEW, TX (KTRK) -- A burglary suspect is dead, after neighbors foiled a break-in in the Channelview area.

The burglar alarms went off at 2am in the 300 block of Lakeside Drive. Harris County Sheriff detectives say the family who owned the home had recently moved out of state. The couple next door were watching over their friends' empty home when the alarm went off. Detectives say the couple grabbed their guns, and went next door.

"Both of the homeowners had their conceal and carry license, armed themselves, went next door to the house and check to see if there were any burglars in the house," said Sgt. Ben Beall of the Harris County Sheriffs Department.

Sgt. Beall says the couple found the burglary suspect locked in a bathroom of their friend's home. They announced that they had guns, and tried to open the bathroom door. When they opened the bathroom door, the suspect allegedly rushed at the homeowners.

"He knocked the female into some of the furniture, both the homeowners discharged their weapons, striking the male. The male was able to get to the backyard, where he collapsed," said Sgt. Beall.

Emergency responders were called, and the suspect was transported to Ben Taub Hospital. He was pronounced dead around 4:30am.

Friends say homeowners on the street were already on edge because just two days ago, the home across the street from Monday morning's shooting was also burglarized.

He says his father-in-law had recently died. He believes people in the neighborhood knew they were packing up his belongings, and that's why they were targeted. He wondered out loud whether the events were connected.

"Yes, we have a remote control, but that doesn't mean someone can't jump the fence like they've been doing," said Flores

The couple who fired and hit the suspect was interviewed by investigators. The results of the investigation will be presented to a grand jury. But for their neighbor Flores, he's relieved.

"The last two days everything's been going on, how I feel, I'm glad they were armed," Flores said. "I'm glad they took care of what they needed to take care of."