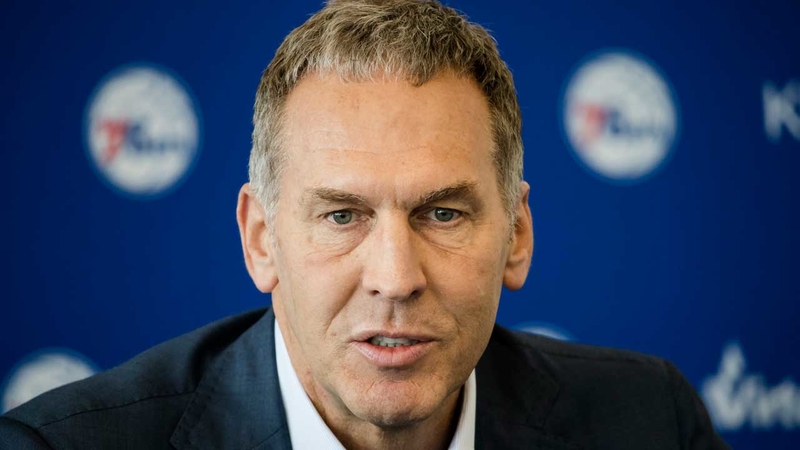 In response, the 76ers issued a statement Wednesday morning:

An online media outlet filed a story linking multiple social media accounts to 76ers President of Basketball Operations Bryan Colangelo. The allegations are serious and we have commenced an independent investigation into the matter. We will report the results of that investigation as soon as it is concluded.

#Sixers respond to report on team president Bryan Colangelo's connection to Twitter accounts criticizing Joel Embiid and other players: "The allegations are serious and we have commenced an independent investigation into the matter." https://t.co/gNn1EdhLXN pic.twitter.com/HrnBRCHQoX

The website asked the team about five Twitter accounts it suspected Colangelo was operating. He said in a statement he used one of the accounts to monitor the NBA industry and other current events, but he was "not familiar with any of the other accounts" brought to his attention and he didn't know who was "behind them or what their motives may be in using them."

Embiid told ESPN on Tuesday night that Colangelo called him and denied the article.

Sixers All-Star center Joel Embiid tells ESPN on Bryan Colangelo: “I talked to him and he said that he didn’t say that. He called me just to deny the story. Gotta believe him until proven otherwise. If true though, that would be really bad.”

The 24-year-old center also tweeted that he didn't believe the story.

"That would just be insane," he wrote.

Yahoo Sports reported Colangelo was standing by his statement to The Ringer.

Colangelo was hired as president of basketball operations for Philadelphia in April 2016. He also served as Toronto's general manager from 2006-2013.

Colangelo, the son of longtime sports executive Jerry Colangelo, stepped in with the Sixers after Hinkie resigned. He lost his GM job in Toronto after the Raptors missed the playoffs for the fifth consecutive season, and Ujiri took over basketball operations.

According to The Ringer, one of the Twitter accounts it connected to Colangelo downplayed Hinkie's role in the franchise's turnaround. It also lamented in another post that Ujiri hadn't done anything to make the Raptors better.

Another account accused Embiid of "playing like a toddler having tantrums," and one criticized Fultz for his work with his "so called mentor/father figure."

Houston Rockets GM Daryl Morey had some fun with the story on creating ways to confirm someone is not using a fake account.

"You need two blue checks to confirm you are not a burner," he wrote on Twitter, referring to the blue verified check on the social media platform.
Report a correction or typo
Related topics:
sportsaction news sportsjoel embiidphiladelphia 76erstwitter
Copyright © 2022 by The Associated Press. All Rights Reserved.
PHILADELPHIA 76ERS
NBA Power Rankings, Week 15: The Eastern Conference race is tighten...
NBA Power Rankings, Week 14: Can Ja Morant and the Memphis Grizzlie...
Embiid goes over 30 again, 76ers beat Rockets 111-91
NBA Power Rankings, Week 13: Return of Klay Thompson, plus the stre...
TOP STORIES
Daylight shows home destroyed after standoff with shooting suspect
What we know about man accused of shooting 3 HPD officers
Suspect arrested after 30-minute chase ends on I-45 in Texas City
Clouds clearing today, sunny through the weekend with rain next week
5 people charged in connection with Pct. 5 corporal's murder
How many times can I reuse my N95 mask?
Decades after TV anchor disappears, convicted rapist denies connection
Show More
Driver dies after slamming into 18-wheeler's trailer on US-59
Woman shot in the shoulder during robbery set up in SW Houston
Prepare for a major closure at I-69 and 610 West Loop this weekend
Officers escort body of corporal killed in ambush to funeral home
ABC13 obtains HPD scanner traffic of chase that led to shootout
More TOP STORIES News