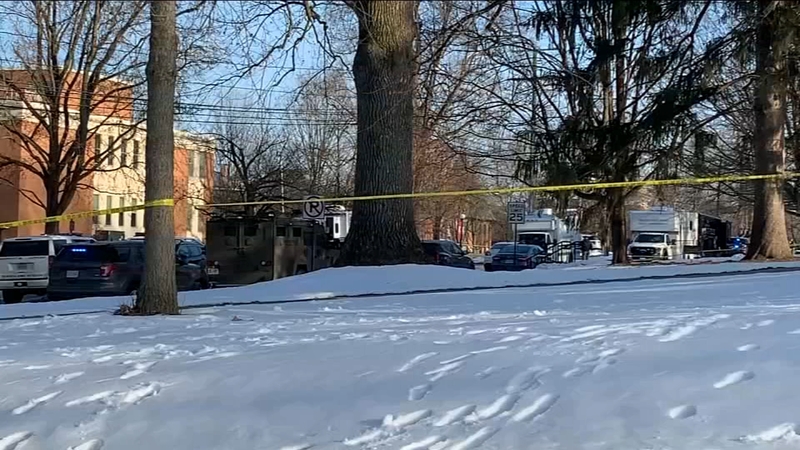 BRIDGEWATER, Va. -- Authorities said a gunman shot and killed two campus officers at a private college in Virginia, prompting a campus lockdown before the suspect was found and arrested.

School officials placed Bridgewater College on lockdown after tweeting a warning of a shooter on campus Tuesday afternoon and urged students to shelter in place.

Virginia State Police said the two campus officers responded to reports of a suspicious man and that he opened fire on them, fatally wounding both officers before fleeing.

"Campus Police Officer John Painter and Campus Safety Officer J.J. Jefferson were shot and killed on campus while protecting us," school President Dr. David W. Bushman said in a message to the campus. "These officers were close friends, known to many of us as the "dynamic duo." John was J.J.'s best man in his wedding this year. They were beloved by students, faculty and staff. I hurt for their families and loved ones, as I know we all do."
Authorities said 27-year-old Alexander Wyatt Campbell was arrested off campus and treated for a gunshot wound. It's not clear whether the shooting was self-inflicted or sustained in an exchange with officers.

He's being held without bond on charges including two counts of capital murder.

On Wednesday, police said Campbell, a former student at the school, was arraigned Wednesday on murder charges.

"My son is mentally ill and he did something that I could not control and no one could come to help him," Campbell said in an interview with the newspaper on Wednesday. "I'm sorry for what has happened. I could not prevent it."

"This is a very hard time for Wyatt and his family and for the families that he has affected," she said through tears. "It is not about gun control. It is not. ... It is about mental illness and how we have no control over that, the way society is right now. I can't help my son."

Authorities have so far not offered any motive for the shootings.


Logan Bogert, a spokesperson for Bridgewater College, said that while Campbell was a student at the school, he was on the track and cross country teams. His last known address was in Ashburn. Campbell attended Patrick Henry High School in Ashland.

Virginia Gov. Glenn Youngkin ordered flags to be flown at half-staff across the state Wednesday to honor the officers.

Bridgewater College has been historically affiliated with the Church of the Brethren. It had an enrollment of about 1,500 full-time students in the fall of 2021, according to its website.