Boeing unveils the water drone of the future in California 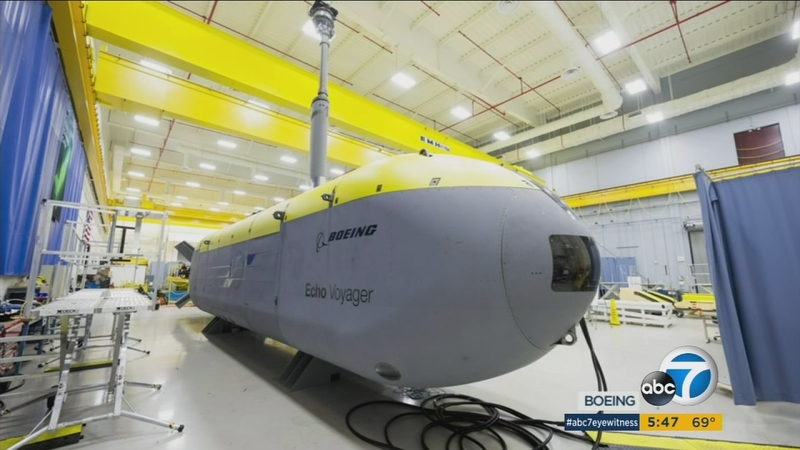 Boeing unveils the water drone of the future in Huntington Beach

HUNTINGTON BEACH, Calif. -- Boeing called it "a game changer" in the world of unmanned undersea vehicles. With great fan-fare inside a test facility in Huntington Beach, the company unveiled the Echo Voyager, its latest submarine.

"It is the future that arrived today," said Darryl Davis, president of Boeing Phantom Works.

The Echo Voyager, which is 51 feet long, is capable of running on its own, unmanned, for months underwater while being able to dive to 11,000 feet.

'It knows how to avoid objects and keep itself safe," said Lance Towers, Director of Sea and Land at Boeing Phantom Works.

The vehicle runs on a hybrid diesel-electric rechargeable system.

Boeing officials said unlike smaller versions, such as Echo Ranger that began operating in 2002, the Voyager doesn't need to be lifted in and out of the water from a surface ship to be recharged.

"You can launch it from a pier, let it go, then two, three, five, six months later it comes back conducting all the missions you needed it to do," Towers explained.

Boeing said those missions could include helping with the search when an aircraft goes down in the ocean.

After an oil spill it could help gather data to see if the ocean is recovering. It can also be used to survey ship wrecks.

Officials said Echo Voyager can rise to the surface while at sea and transmit information in near real-time.

Boeing won't give exact figures, but said Echo Voyager cost tens of millions of dollars and was completely self-funded. Officials said the cost savings to use it will stand out.

Officials said the savings will come from not having to launch and retrieve it from a surface ship, eliminating daily costs of the ship, the crew and fuel.

Towers said Boeing is in talks with a number of customers interested in the autonomous vessel, though they won't yet reveal names.