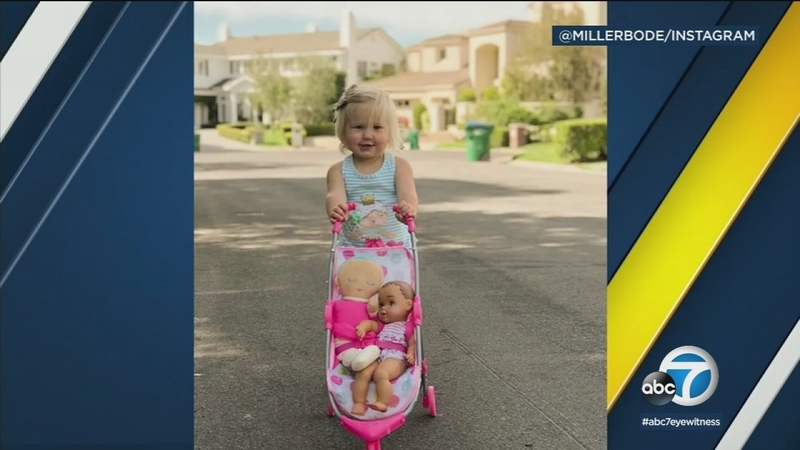 COTO DE CAZA, California -- Newly-released 911 calls tell how authorities and loved ones came together in the unthinkable tragedy for Olympic skier Bode Miller and his wife, when their 19-month-old daughter drowned in a pool in Coto de Caza.

Authorities said Emeline Miller had just been pulled from a swimming pool at about 6:30 p.m. Saturday.

"The baby fell in the pool. No, don't stop!" the woman said.

"OK, paramedics are on the way," said the operator.

The baby was the daughter of Olympic Gold Medalist Bode Miller and his wife, Morgan Beck. Authorities said Emmy and her mother were visiting a neighbor when the child walked away unnoticed. It's not exactly clear how long she was underwater.

"Does she have a pulse?" the operator asked.

"Does she have a pulse?" the operator asked again.

"No pulse," she replied.

"Are you doing CPR? Do you need me to coach you through it?" the operator asked.

"Coach me through it, please," the woman replied.

They performed CPR shortly after.

"OK, if she's got a pulse, do not do CPR, OK? Tilt her head back and open her airway and see if she's breathing," the operator said.

She was still not breathing. They continued CPR until paramedics arrived. Orange County Fire Authority Capt. Steve Concialdi said Emmy was in full cardiac arrest when firefighters got to the scene.

The baby girl was transported to a hospital, where she died.

Miller said they are beyond devastated. In an Instagram post he wrote: "Her love, her light, her spirit will never be forgotten. Our little girl loved life and lived it to it's fullest everyday. Our family respectfully requests privacy during this painful time."

"Our hearts break for the family, for the neighbors, the whole community," Concialdi said.

Fire authorities said the tragedy is a reminder to others to learn the ABCs of Water Safety.

"A is for active supervision. B is for barriers, some sort of barrier between the house and the pool, and C is for CPR classes and swimming lessons," explained Concialdi.

So far this year, 13 people have drowned to death in Orange County, three of them children under the age of 4, authorities said.

Miller, 40, is the most decorated male U.S. skier with 33 World Cup wins, two overall titles, four world championships and six Olympic medals, including gold at the 2010 Vancouver Games in the super-combined. At the 2014 Sochi games, he was the oldest alpine skier - at age 36 - to win a medal.

He has three other children.