Shout out to the 713: Beyonce gives fans rare look behind-the-scenes of Houston show 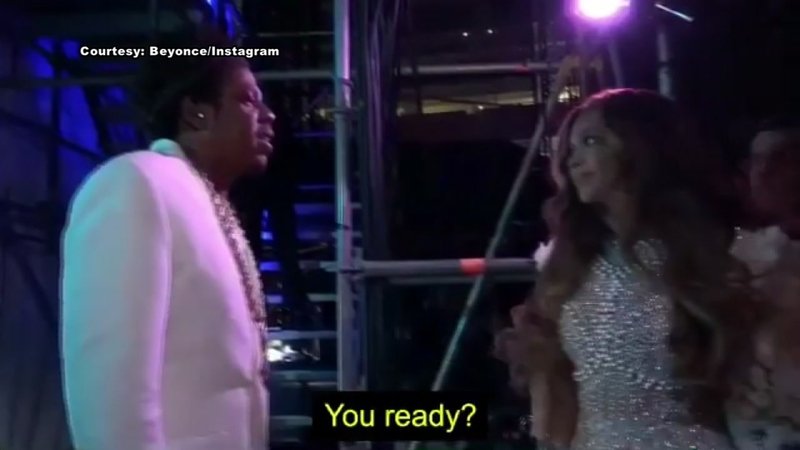 HOUSTON, Texas (KTRK) -- Fresh off two high-powered shows at NRG Stadium over the weekend with husband and rap mogul Jay-Z, Beyonce posted rare behind-the-scenes footage of the concert on Instagram.

The couple is currently on their On the Run II tour.

In the video, Queen Bey shared an intimate moment with the rapper backstage, with Jay-Z asking her, "You ready, B? Let's go get 'em."

Fans might also recognize the question from their duet "'03 Bonnie and Clyde," one of their first hits together.

Beyonce also gives a shout out to her hometown of Houston in the video, mentioning the 713.

As expected, Bey and Jay drew some star-power to the show.

Astros ace Justin Verlander and his model wife Kate Upton caught the tour on Sunday after Verlander threw 11 strikeouts in seven innings against the Arizona Diamondbacks.

Teammates Carlos Correa and fiancee Daniella Rodriguez, and Tony Kemp and his wife, Michelle, were also dancing in the crowd.

Backstage, former Houston Texan Andre Johnson cheesed with Jay-Z, while members of Houston rap royalty, including Bun B, Slim Thug and Paul Wall watched the throne with DJ Khaled, who is also part of the tour.

Even some ABC13 reporters were in the house.

For those who couldn't score a ticket, they were left with some serious fear of missing out.

#FOMO I just hope someone makes sure Beyoncé sees this gif because it’s one of my favorites https://t.co/qsvUIAnmQK pic.twitter.com/nsucpFeyB5

The show was also full of surprises for at least one fan who won a $100,000 scholarship from Beyonce and Jay-Z during DJ Khaled's set Sunday night.

According to the Boys and Girls Clubs Houston, senior Alezae U. is a student at Galveston Ball High School. She will be the first person in her family to go to college.

⭐️⭐️⭐️ Johnny Mitchell Club member Alezae received a ‼️$100,000 ‼️ scholarship at the Beyonce and Jay-Z concert tonight! She is a senior at Ball High School and will be a first-generation college student next year. AMAZING! #ontheruntour2 pic.twitter.com/XwFskGhauQ

If you couldn't see them in Houston, you might consider going on a road trip. Beyonce and Jay-Z have a few days off before their next show Wednesday in Phoenix.
Report a correction or typo
Related topics:
arts & entertainmenthoustonlive musicbeyonce
Copyright © 2022 KTRK-TV. All Rights Reserved.
TOP STORIES
HCSO sergeant hit and killed by driver during escort, sheriff says
2 adults killed and 12-year-old hurt in crash with speeding tow truck
Suspect accused of killing Pct. 5 corporal still on the run
Grab the umbrella! Widespread showers move in Monday
Inside Texas hospital battling omicron: 'We're about to catch on fire'
Tax filing season starts Monday. What to expect for 2022
5 tax changes that can boost your refund this year
Show More
COVID-19 patient at center of ventilator fight dies in Texas
3-year-old drowns in pool in NW Harris County, sheriff says
Woman found in a ditch after a hit-and-run
Little York firefighters work to put out fire at N. Houston apartment
Former Houston Oiler takes over Prairie View A&M football
More TOP STORIES News