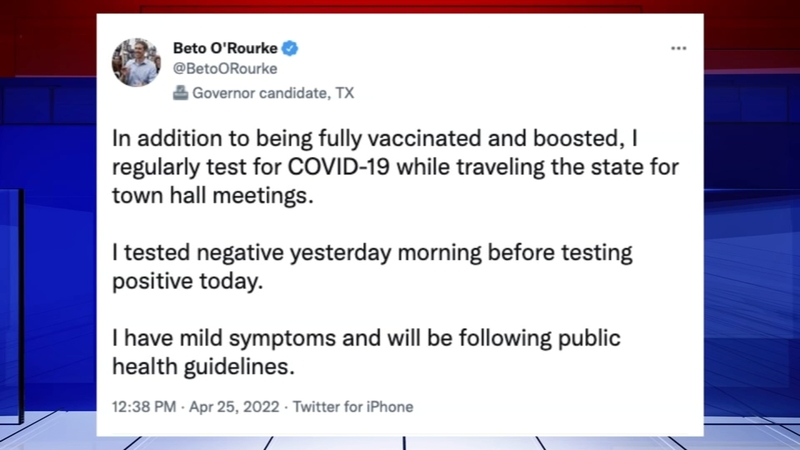 Democratic candidate for Texas governor Beto O'Rourke says he tested positive for COVID-19 Monday, a day after holding a campaign stop in Livingston.

"I have mild symptoms and will be following public health guidelines," the former El Paso congressman tweeted.

In addition to being fully vaccinated and boosted, I regularly test for COVID-19 while traveling the state for town hall meetings.

I have mild symptoms and will be following public health guidelines.

O'Rourke, who is heading toward a November gubernatorial showdown with incumbent Republican Gov. Greg Abbott, said he's fully vaccinated and boosted, and he regularly tests as he travels the state for town hall meetings.

The Democratic hopeful, who became a rising star nationally as he challenged for Ted Cruz's U.S. Senate seat in 2018, posted to his Twitter a picture of himself at a crowded town hall in Livingston, located about an hour outside of Houston. The photo shows the candidate speak with a few people visibly wearing masks.

His Twitter feed also posted a live stream of the event. He was not masked.

O'Rourke's opponent Gov. Abbott also came down with COVID within the last year. Abbott tested positive in August 2021 despite being fully vaccinated.

Word of the infection came a day after his appearance at a "standing room only" event in Collin County.

Abbott's office at the time said he tests daily and isolated himself at home.