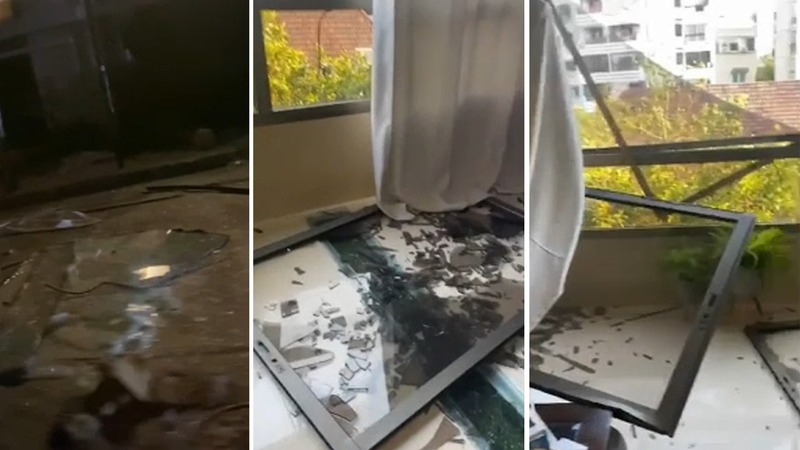 BEIRUT, Lebanon (KTRK) -- A Houston family in Beirut, Lebanon, at the time of Tuesday's deadly explosion is sharing their experience.

Mohamed Masri told ABC13 he was several miles from the catastrophic blast, but his apartment was devastated.

Masri said 90 percent of the buildings near the port and downtown Beirut are destroyed. He and his family heard two explosions, but the second one was the most destructive and was caught on his home surveillance camera.

Video from inside Masri's home, which is about six miles from the port in Beirut, showed doors ripped off their frames and debris everywhere.

He said the shock wave hit his building within seconds. After the explosion, Masri went outside. He said the port is off-limits, but the damage downtown was unprecedented.

"We saw some vans... their doors were popped open. The shock wave was so strong, it blew off doors, like metal doors. That is how strong it was. I saw some cars that were upside down, just from the shock wave," Masri said.

Masri said the hospitals are overwhelmed, and the city is in desperate need of medical supplies. He believes it could take years to get the city back to normal.

Experts and videos of the blast suggest fireworks and ammonium nitrate appear to have been the fuel that ignited the explosion, which as of Wednesday, has killed at least 100 people and wounded thousands.

But the compound itself typically doesn't detonate on its own and requires another ignition source. That likely came from a fire that engulfed what initially appeared to be fireworks that were stored at the port.

The Beirut blast, based on the crater and glass windows being blown out a distance away, exploded with the force equivalent to detonating at least 2.2 kilotons of TNT, said Sim Tack, an analyst and weapons expert at the Texas-based private intelligence firm Stratfor.

What initially started the fire at the port remains unclear. Beirut was sunny before Tuesday's explosion, with a daily high of 30 degrees Celsius (86 degrees Fahrenheit).

Lebanese Interior Minister Mohammed Fahmi, in comments to a local TV station, made no mention of ignited fireworks but said it appeared the blast was caused by the detonation of more than 2,700 tons of ammonium nitrate that had been stored in a warehouse at the dock ever since it was confiscated from a cargo ship in 2014. That amount could cause the explosive force seen in the blast Tuesday, Tack said.

The blast struck with the force of a 3.5 magnitude earthquake and was heard and felt as far away as Cyprus, 180 miles across the Mediterranean.

Based on the timeline and the size of the cargo, that ship could be the MV Rhosus. The ship was initially seized in Beirut in 2013 when it entered the port due to technical problems, according to lawyers involved in the case. It came from the nation of Georgia and had been bound for Mozambique.

"Owing to the risks associated with retaining the ammonium nitrate on board the vessel, the port authorities discharged the cargo onto the port's warehouses," the lawyers wrote in a 2015 article published by shiparrested.com. "The vessel and cargo remain to date in port awaiting auctioning and/or proper disposal."

It remains unclear what conditions the ammonium nitrate had been stored in - or why tons of an explosive chemical compound had been left there for years. Lebanon already was on the brink of collapse amid a severe economic crisis that has ignited mass protests in recent months.

The devastation surrounding the port resembled other ammonium nitrate explosions, such as the 1995 Oklahoma City bombing and a 1947 ship explosion that struck Texas City, Texas.