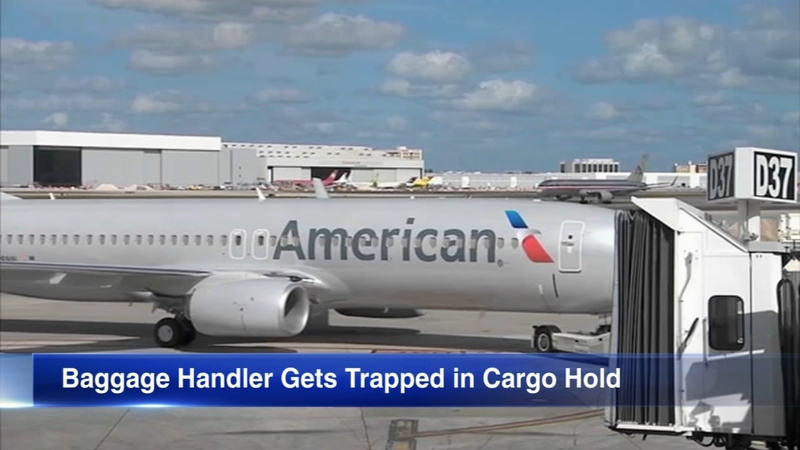 Baggage handler trapped in cargo hold during flight to O'Hare

CHICAGO, Illinois -- There was a surprise discovery on an American Airlines plane that landed at O'Hare last weekend.

A baggage handler was found trapped in the cargo hold. He admits he was drunk and fell asleep inside the 737 on the flight from Kansas City to Chicago, police said.

The employee for regional carrier Piedmont Airlines was not hurt and was not charged with a crime, but he has been suspended.

A source told ABC News the man likely wasn't discovered before departure because there was no luggage loaded into the forward hold for the flight.

"A Piedmont Airlines employee, who was working an American Airlines flight on the morning of Oct. 27 at Kansas City International Airport (MCI), inadvertently fell asleep in the forward cargo hold of a Boeing 737-800 aircraft," American Airlines said in a statement. "The flight subsequently took off with the team member in the cargo hold, which was heated and pressurized.

"Our top priority is ensuring the well-being of the Piedmont employee," the statement continued. "He did not request any medical attention upon arrival in Chicago, and we are grateful that he did not sustain any injuries. The American team is very concerned about this serious situation, and we are reviewing what transpired with our Piedmont and Kansas City colleagues."
Report a correction or typo
Related topics:
travelo'hareillinoisair travelo'hare airportamerican airlinesu.s. & world
Copyright © 2022 WLS-TV. All Rights Reserved.
TOP STORIES
Coast Guard suspends search for Houston woman off Alaska coast
Child left alone starts E. Houston apartment fire
The Railroad Killer
10-month-old girl left in hot car for 'several' hours, HPD says
Your chance of rain is going up this weekend
Known white supremacist threatening armed standoff at Texas Capitol
Katy ISD employee's husband accused of stabbing wife to death
Show More
Judge: COVID-19 asylum restrictions must continue on US-Mexico border
Track your fitness with an app? Doctors wary about certain ones
Harris County Election Day process under fire by Republican Party
Woman stopped at US border with condom-wrapped fentanyl
Parents reminded they're 'rolling the dice' on kids without COVID shot
More TOP STORIES News