KTRK
By Steven Romo and Miya Shay
HARRIS COUNTY, Texas (KTRK) -- A 16-month-old is safe after a car was stolen with him in the back seat from a gas station in northeast Harris County.

Deputies say that around midnight, a mother, identified as 21-year-old Kimberly Cook, and her boyfriend, 29-year-old Anthony Blue, left their Chrysler 300 running and unlocked in the parking lot while they were inside the store to play gaming machines.

Video captures, toddler, mom, and her boyfriend at video game consoles shortly before he was put in the car, and the car was then stolen. More on #abc13 at 5 & 6! https://t.co/udJitKFZha pic.twitter.com/vhJTNiJRiZ

In surveillance video viewed by ABC13, you can see Cook, Blue, and the baby arriving at the convenience store around 9:30 p.m. The couple played games for about 30 minutes before leaving then returned an hour later to continue to play. Clerks at the gas station said when they returned, that's when they left the toddler in the car, apparently to sleep.

Shortly after they returned to playing video games, suspects Jabari Davis and Vincent Cannady were seen on video entering the same gas station to ask for directions. Then, they walk out.

About 30 minutes after that, which was around midnight, Davis and Cannady are accused of taking the car with the baby inside. In the video, you can see Blue and Cook running outside to check on the baby, but the car was missing. The 16-month-old was asleep in a car seat in the back seat of the vehicle.

During the search for the stolen car, a park ranger was closing up MacGregor Park on Calhoun Road around 12:25 a.m.

He locked all the gates, and the park was empty, except for a homeless person, whom he told to leave.

As the park ranger moved closer to one of the gates, he saw what he thought was an animal walking through the parking lot. It turns out it was the missing 16-month-old shivering in his onesie.

Houston police responded and took the child to Texas Children's Hospital as a precaution.

Around 1 a.m., police found the couple's stolen car on the 610 South Loop, near Highway 225, where the suspects inside led officers on a chase.

The car finally stopped off T.C. Jester and the North Loop. Two suspects, identified as 18-year-old Jabari Davis and 19-year-old Vincent Cannady, were taken into custody and questioned. 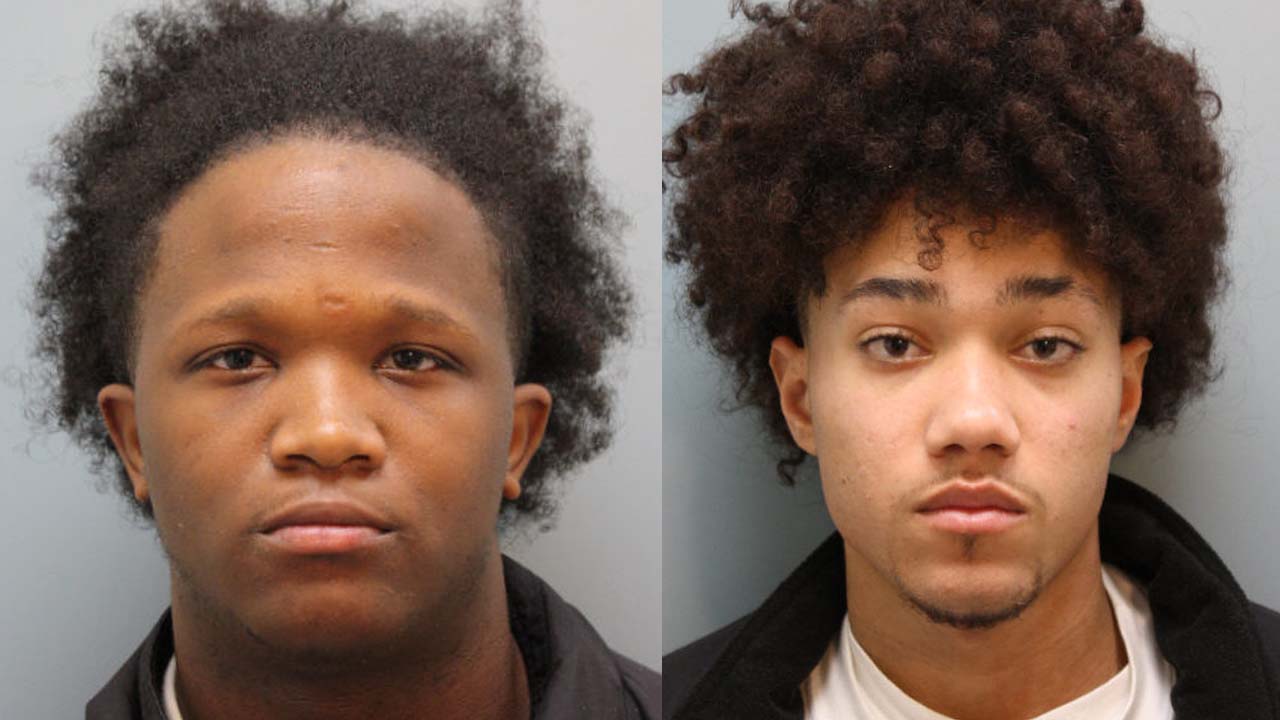 Vincent Cannady, left, and Jabari Davis are the two men accused of stealing a running car with a baby inside at a gas station in northeast Harris County.

"It's pretty chilly out here and a lot of wild animals running around out there. Things could've ended very differently had the park ranger not come by here and located the baby," said Kerry Clopton with HFD.

Cook and Blue were charged with child endangerment.

According to the maternal grandmother, the child's name is Franklynn.

NEW PHOTOS: This is 16-month-old Franklynn, who was left in an unlocked, running car while police say his mom Kimberly Cook and her boyfriend Anthony Blue played gaming machines. Franklynn was inside the car when it was stolen. Cook and Blue are charged. https://t.co/IU2bIq7IsK pic.twitter.com/koGK4790QN

YMAC is a community corrections treatment facility where individuals can be ordered as a condition of probation. It is a treatment facility. It is not a jail or prison and is not staffed by law enforcement officers or corrections officers like a jail or prison. While the facility is locked, the staff cannot physically restrain a probationer attempting to leave the facility. If a defendant leaves without permission, he/she/they can be charged with a State Jail Felony.

In these cases, law enforcement is contacted when they leave and it's up to the DA Office to take charges: Unauthorized Absence from a Community Corrections Facility charge.