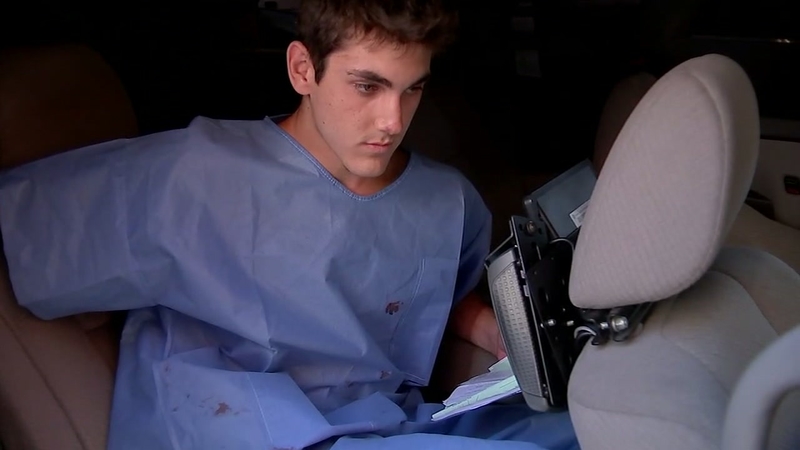 Teen charged in deadly crash that killed 2 out of jail

ATASCOCITA, Texas (KTRK) -- A 17-year-old charged in a violent crash that killed two other teenagers in northeast Harris County has bonded out of jail.

Our cameras were there when Jaggar Clayton Smith was released from custody after being charged with two counts of intoxication manslaughter.

Just before 12:30 a.m. Wednesday, deputies say Salma Gomez and Chloe Robison, both 16, were passengers in Smith's 2008 Nissan Altima when Smith was speeding southbound in the 18300 block of Timber Forest.

Smith lost control and slammed into trees in the median, splitting the vehicle in half.

The front half of the car rotated clockwise, stopping in the median. The back half of the vehicle continued to spin southeast, hitting another tree.

Robison, who was sitting in the back, died at the scene.


Gomez was in the front passenger seat. She was taken to Memorial Hermann Northeast Hospital, where she died.

Smith was taken to Houston Northwest Medical Center, where he was treated for minor injuries. Authorities believe he was drinking.


"Just to see the devastation, how the metal is torn in half. This is not a major roadway. To see the short distance traveled to speed, you lose control, it's very violent," Harris County Sheriff Ed Gonzalez said. "Lives torn and lost and families impacted. It's very tragic."

2 teens killed in a suspected drunk driving crash were both close friends and classmates, authorities say.

Smith's uncle told ABC13 that his nephew was at a quinceanera reunion party that Gomez threw Tuesday night.

Smith is a current Kingwood High School student, but previously attended Atascocita High School, where the two victims were enrolled. One of the girls who died was a sophomore.

Teens involved in this accident were close friends and students at @HumbleISD Atascocita High School. #hounews

Friends of the students went by the scene Wednesday morning to drop off flowers.

A memorial is growing at the scene of a crash that killed two Atascocita High School students.

"They were good girls. They were fun, always good spirits, bright, always trying to have fun and laugh," said Graydon Morrow, a friend of the victims.

Humble ISD said grief counselors will be available at Atascocita High School on Thursday from 10 a.m. to 4 p.m.

Counselors will be available for students at Atascocita High School on Wednesday and Thursday.