Turn to Ted gets resident $3,700 refund for Astroworld Festival tickets that didn't arrive in time 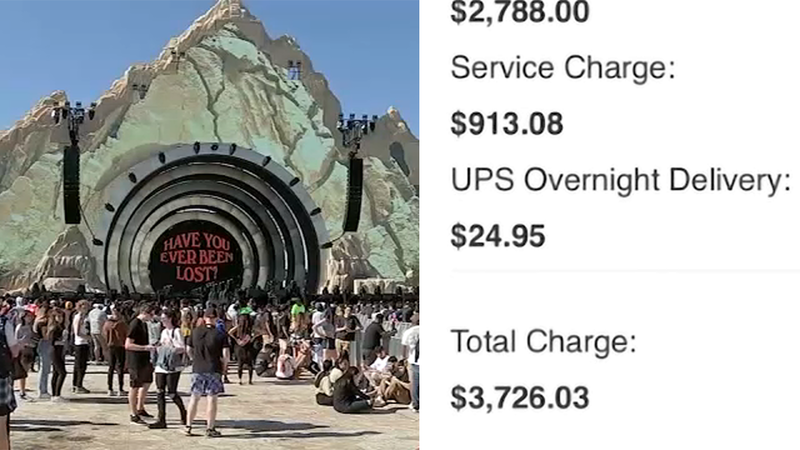 Turn to Ted gets resident $3,700 refund for Astroworld Fest tickets

HOUSTON, Texas (KTRK) -- More than a month after the Astroworld Festival was canceled amidst tragedy, would-be concert goer Mario Garza still didn't have a refund. But unlike a lot of people who went to the show and wanted refunds after the cancellation, Garza told ABC13's Turn to Ted team he never even got the tickets he paid thousands for before the festival started.

As Garza looks back on it, he admits it may be a good thing he never got the Astroworld tickets he paid so much for.

"I was like in a way happy that I didn't go, you know," Garza said.

But that's only after we all knew how it ended. Garza and his sister went to the last Astroworld in 2019. They said they wanted to get back, but wanted to avoid the crowd.

"From the last experience that I had, I knew there was a lot of bumping, a lot of pushing. It was very crowded. I tried to go with the VIP, the more expensive ones, so I wouldn't be in the crowd," Garza told Oberg.

Garza told us he checked several resale sites before finding those top level VIP seats at TicketsOnSale.com in early May, but they came at a steep price of $3,726. Garza showed ABC13 receipts showing he paid for overnight delivery. He still has a Tickets On Sale email showing the tickets should arrive around four days before the Nov. 5, 2021, show, but as the date got closer than that, still no tickets.

"And then the day of the event came and they said they're going to get here by 5 (o'clock)," he said.

But the first day of Astroworld would be well underway by then.

Garza and his sister went to the mall that day. They didn't even know what happened until the next morning. While thankful they weren't there, Garza still wanted his money back for tickets he didn't receive. He told us the company that had been telling him to watch his mailbox now wasn't telling him anything. So, he Turned to Ted.

"My father's the one that suggested to call you guys," Garza said.

We got in touch with Tickets on Sale through their attorney, who told us:

Once the Turn to Ted team reached out to Tickets on Sale, the issues cleared up quickly. Garza was refunded his money and Tickets On Sale gave him nearly $1,000 extra to buy future tickets.

"They gave me the money the next day, like straight up the next day. Everything. I've been calling for weeks," Garza said.

ABC13 checked the Better Business Bureau rating for the Tickets on Sale. BBB gives Tickets On Sale an F rating. There were 545 complaints in the last three years with 302 of them having been resolved. ABC13 asked the company's lawyer about the rating, but he did not respond.

Have a tip for Ted Oberg? A problem to solve? Get in touch with us on our tip page, or send a tip below. (On mobile? You can open our form by tapping here.)
Related topics:
houstonconcertticketsastroworld festival tragedylive musicrefundentertainmentturn to ted
Copyright © 2022 KTRK-TV. All Rights Reserved.
TURN TO TED
Galveston woman Turns to Ted after flood insurance issues
Widow Turns to Ted after delays with city worker's final paycheck
Internet, phone services restored after Houstonian Turns to Ted
Woman Turns to Ted after rent relief mistake nearly cost her eviction
TOP STORIES
'It was like a mad dash:' Clear Creek ISD senior set to graduate
Man dead after being shot during road rage incident, HCSO says
Murder suspect dead after found unresponsive in cell, sheriff says
Scattered storms move in tonight ahead of front
Astros fan from Spring celebrates 95th birthday with favorite team
Child hospitalized after found 'unresponsive' at Splashtown
Runner dies after collapsing at finish line of Brooklyn Half Marathon
Show More
Global K-pop sensation Seventeen kicks it in Houston in new tour
Authorities search ends for man with felony warrant out for his arrest
Early Voting holds off Epicenter to win Preakness Stakes
'NFTs: Enter the Metaverse' | Trailer
Driver shot during attempted robbery on Gulf Freeway feeder, HPD say
More TOP STORIES News