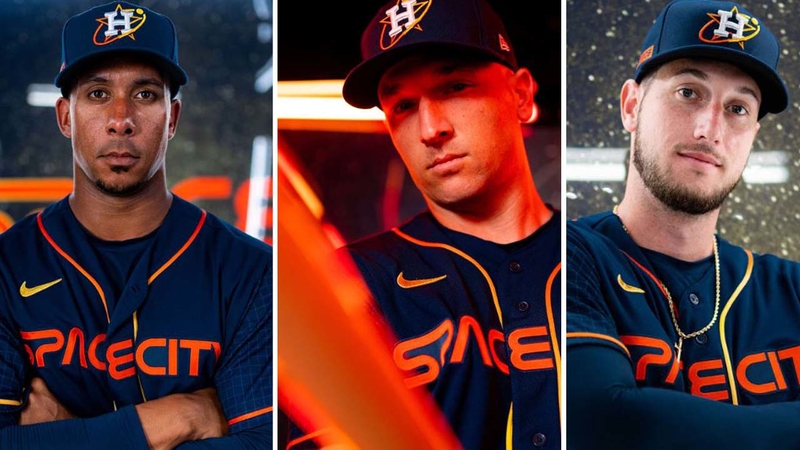 HOUSTON, Texas (KTRK) -- There's nothing like putting on for your city.

The new fits were featured in a hype video Sunday morning on the Astros' social media pages complete with shots of the city's skyline, and of course, various players in the gear.

With this jersey, we remind the world...

This is Mission Control.
This is Houston.
This is #SpaceCity. pic.twitter.com/J8ijYCWJJj

The navy uniforms have one-of-a-kind rainbow piping throughout. The rainbow is a retro element of the Astros uniforms from the 1970s.

Here's what each part of the uniforms represents, according to the Astros' website.

Fans were first able to get their hands on the gear at FanFest on Sunday. The gear is also available on online, where some jerseys were going for about $160.

If you prefer to go in person to see the collection, which includes jerseys, T-shirts, caps, and rainbow gradient socks, the Astros team store has extended hours this week.

The Union Station Team Store has extended hours this entire week. Make sure to stop by to get your #SpaceCity merch! Also available online at https://t.co/qbHqRPOYdV. pic.twitter.com/3B4WyURCCu

Astros will debut the uniforms on April 20, when they host the Los Angeles Angels at Minute Maid Park. After that, the outfits will be worn for Monday home games or what the club has dubbed "Space City Mondays."

The Astros are among seven ballclubs selected to wear the City Connect uniforms this season.

The Washington Nationals, who debuted their City Connect uniforms on Saturday, Kansas City Royals, Colorado Rockies, Los Angeles Angels, Milwaukee Brewers and San Diego Padres are the other clubs wearing them for 2022.